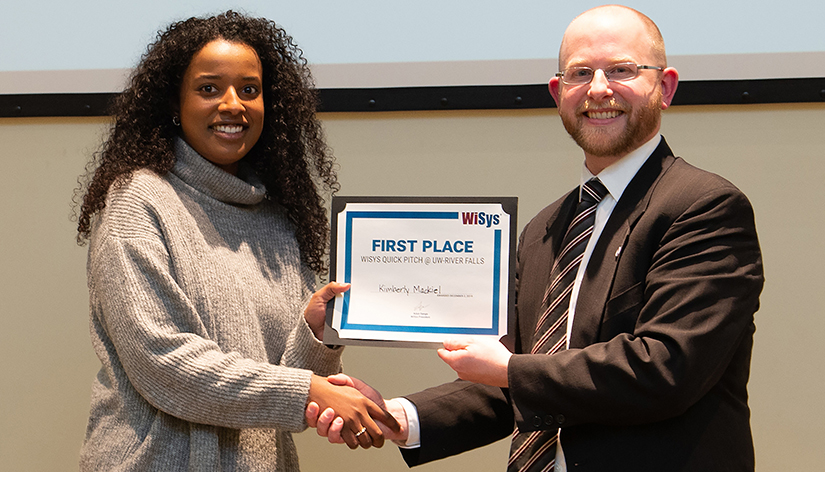 Mackiel’s winning presentation was called “Producing Polymer-Quantum Dot Composite Materials Through Direct Ligand Reaction.” Nanotechnology is a readily growing billion-dollar industry and nanoparticles are being used in devices such as flat panel displays for better color saturation, according to Mackiel. Mackiel is from Lake Elmo, Minn.

The competition inspires UW System students to consider the impact of their research and effectively communicate it to the public.

Anderson’s research focuses on finding a more consistent and humane method of on-farm euthanasia for market weight pigs using the common method of a penetrating captive bolt. As pigs mature, the frontal location becomes less effective due to changes in the thickness of the bone and tissue that protects the brain. Alternative locations for captive bolt euthanasia are needed for mature pigs, according to Anderson.

UWRF senior and neuroscience major Anthony Craig, of Burnsville, Minn., took home the People’s Choice Award, sponsored by the UW-River Falls Chancellor’s Office and voted on by the audience. His presentation was titled “Reduction of Waste: Mechanochemically Induced Reactions.”

Solvents—which have historically been used to assist in making and breaking bonds in chemical reactions—allow people to do many things. The use of solvents, however, can be harmful due to the waste produced. One potentially advantageous route to consider is mechanochemistry, which can remove the solvents from chemical synthesis, reducing the amount of waste production, according to Craig.

WiSys is a nonprofit organization that works with faculty, staff, students and alumni of the UW System to facilitate cutting-edge research programs, develop and commercialize discoveries and foster a spirit of innovative and entrepreneurial thinking across the state.