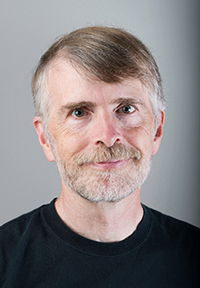 The award is given in recognition of an exemplary level of commitment and service to the Society of Physics Students and the physics honor society Sigma Pi Sigma. Blodgett is only the seventh person to receive the award since it was founded in 1996.

“Earl is an extraordinary educator, physicist and service-oriented leader who has inspired countless students and colleagues over his 33 distinguished years here at UW-River Falls,” said Dean Yohnk, dean of the College of Arts and Sciences. “Earl has helped to develop and grow our nationally-recognized Physics Department and he is truly deserving of this rare and special recognition from Sigma Pi Sigma.”

Blodgett has been involved with the Society of Physics Students since he was a UWRF student in the 1970s and with the national council since 1999 when he served two three-year terms as zone councilor followed by two two-year terms as the organization’s president. He has served as historian since 2009.

The Worth Seagondollar Service Award is named in honor of Lewis Worth Seagondollar of Raleigh, NC, who was a member of the Manhattan Project, the first to measure the critical mass of plutonium and was present at the Trinity Test.