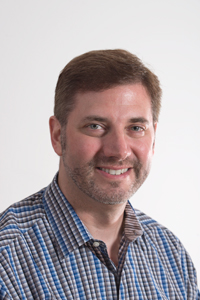 August 7, 2015 -- Todd Savage, a University of Wisconsin-River Falls associate professor in the school psychology program, is being honored for his work on lesbian, gay, bisexual and transgender issues.

Savage will receive the 2015 Dr. P. B. Poorman Award for Outstanding Achievement on Behalf of LGBTQ People at an October 9 luncheon at UW-Madison.

Savage was selected as the UW-River Falls awardee in recognition of his "consistent and important achievements in service to LGBTQ people within the UW System," according to a letter from UW System President Ray Cross, and David J. Ward, interim senior vice president for Academic and Student Affairs.

"We applaud your passion, skill, and commitment, and your role as a tremendous resource to, and advocate for, the LGBTQ community," they wrote.

Savage said the award came as a surprise.

"I had no idea I had been nominated for the Poorman Award, and I must say I am overwhelmed and honored to be recognized in this manner," he said. "I am passionate about making schools and the community, in general, safer places for LGBTQ persons and I feel privileged to be able to work toward this goal at UWRF."

The award comes just a month after Savage began his term as president of the National Association of School Psychologists. Savage represents more than 25,000 school psychologists throughout the United States and abroad. During his tenure, Savage said he'd address issues like bullying, stress and depression — all of which greatly affect both LGBT and special needs students.

The P.B. Poorman Award publicly recognizes the contributions that LGBTQ people and their allies make to the UW System, diversity and LGBTQ inclusivity. Winners are selected based upon three criteria:

1.  Advocacy, activism or scholarship that has fostered social justice and organizational change.

2.  Created positive transformation within their institutions and/or the community to achieve the goals of diversity, equity and inclusion.

3.  Participated in efforts to improve the climate for, or visibility of, LGBTQ people.

"This is a much-deserved recognition for the excellent work Dr. Savage has done and continues to do in support of LGBTQ people that reaches beyond UWRF, the state and the region," said Larry Solberg, dean of the College of Education and Professional Studies.In receiving the award, Savage said he owes a debt of gratitude to everyone who has helped him with the work.

"The recognition is not mine alone, as I collaborate with amazing students and colleagues," he said. "I also am fortunate to have been guided by gifted mentors, as well. I hope that through my work, the ripple effect continues to expand and that others will pick up the torch and continue the work."