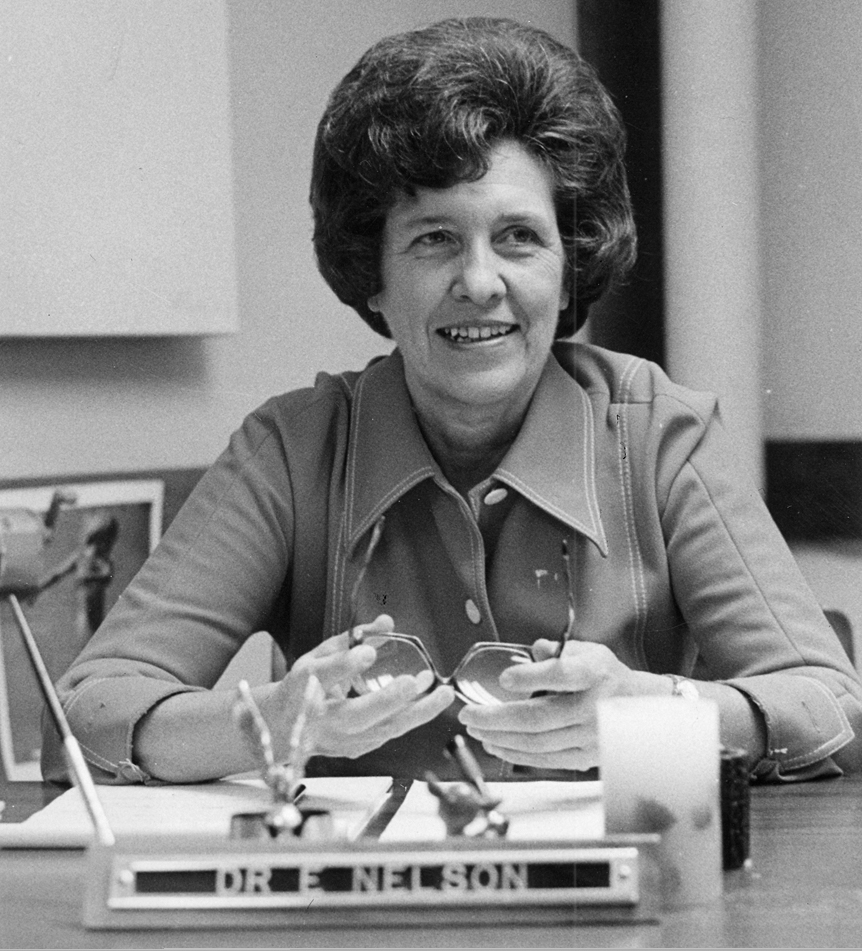 November 13, 2015-- UW-River Falls Chancellor Dean Van Galen has announced that the campus roadway added at the site of the new Falcon Center will be named in honor of former faculty member and women's athletics advocate Emogene Nelson.

Nelson, a UWRF Distinguished Teacher, Distinguished Alumna and the first female UWRF Hall of Fame inductee, has long been remembered through the lasting impact she had on her students. Now her legacy will continue to be honored with the naming of Emogene Nelson Avenue, one of the main access points for the Falcon Center connecting South Main Street to South Sixth Street.

The new roadway adds a second exit from the parking lot area at Ramer Field, allowing traffic to exit onto both S. Main Street and S. Sixth Street after events.

In their resolution to name the Falcon Center roadway in honor of Nelson, the UW-River Falls Faculty Senate recommended the naming "in order to memorialize her legacy and to honor her work and significant impact on academics, athletics and recreation at UW-River Falls."

A Pierce County native, Nelson earned her rural education degree in 1944 on the River Falls campus and went on to further her education in La Crosse, ultimately obtaining a Ph.D. from the University of Minnesota. Nelson joined the UW-River Falls faculty in 1959 and served the university in many capacities until her death in 1984, including as chair of the Physical Education Department and assistant to the Vice Chancellor for Academic Affairs.

"Dr. Nelson was an exceptional teacher who loved what she did, and her enthusiasm spilled over to her students," said former UWRF Health and Human Performance Professor and Chair Mike Davis.

Nelson was also a beloved coach of women's basketball, track, and softball, becoming a mentor and a role model to generations of students. As a testament to her legacy, former students and colleagues have contributed more than $50,000 to the Falcon Center fundraising project for a classroom in the new facility to be named in her honor.

"[The naming of the roadway] is most deserved," commented former UWRF Chancellor, Dean and faculty member Connie Foster. "She was truly inspirational in the lives of her students, her colleagues who thought the world of her, and her impact on women's athletics in the State of Wisconsin. She was an amazing person."

Nelson's most impactful legacy has in fact probably been her pivotal role in the introduction of women's athletics to Wisconsin campuses. When the first Wisconsin Intercollegiate Athletic Conference was created in 1978, Nelson served as its executive secretary and was instrumental in leading the colleges and universities into the field of women's competitive sports. She was recently named to the Wisconsin Intercollegiate Athletic Hall of Fame for her work and influence in women's athletics.

Falcon Center construction began in the summer of 2014 and is expected to be complete by fall 2017. The facility will house UWRF's Health and Human Performance Department, classrooms, athletic and strength facilities and a student wellness center.

For more information, contact Executive Assistant to the Chancellor Beth Schommer at beth.schommer@uwrf.edu or 715-425-0662.