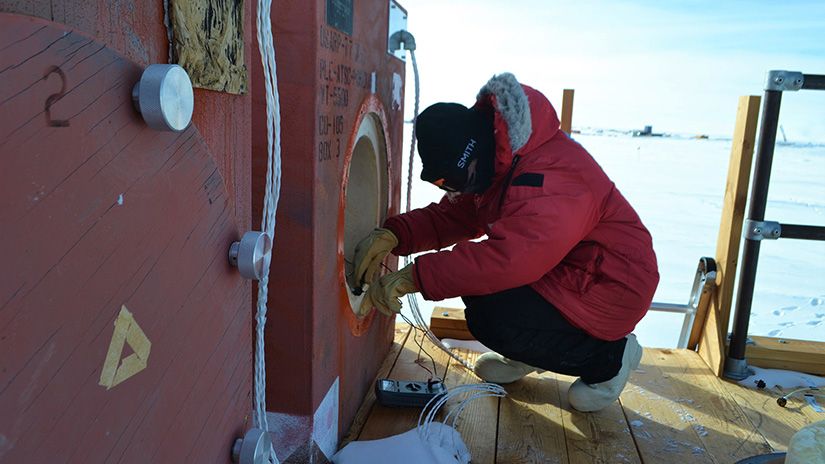 Physics Professor Suruj Seunarine garnered the $450,000 NSF grant, paid out over three years, that will allow faculty and students in the Physics Department to continue to pursue science while operating and maintaining the neutron monitor station at the South Pole.

The monitors at the South Pole are part of an international network that detects and measures radiation from space that reaches the Earth’s surface. UWRF, along with the Universities of New Hampshire and Delaware, are part of the decades-long experiment that began in 1950s.

“I was just relieved that the experiment would continue,” Seunarine said. “I have been working on it since 2012. If we didn’t get funding, we couldn’t continue operating the South Pole neutron monitor.”

The NSF funding supports a post-doctoral research assistant at UWRF for three years and allows UWRF students and faculty to make field trips to the South Pole to maintain and calibrate the station.

One part of the project is purely for science, to measure the cosmic rays that come to Earth, Seunarine said. “It is useful to students to study the cosmic radiation that arrives on Earth,” he noted. “It helps build our body of knowledge about cosmic rays and what is going on from a physics perspective in our solar system.”

Also, the monitors measure radiation levels that could impact human activity on Earth and in space and interfere with electronics or the power grid.

“In some cases, the radiation could be harmful to astronauts on the space station,” Seunarine said, noting the information is also helpful to aircraft pilots to avoid radiation exposure.

“We provide the data from the neutron monitors in almost real-time,” he noted.

The grant links all U.S. neutron monitors into the Simpson Neutron Monitor Network, coordinating the operations and data analysis. University of Chicago Professor John Simpson, who died in 2000, invented the neutron monitor in 1948 after his work on the Manhattan Project. During a massive solar flare in 1956, data collected by neutron monitors gave the first indication of the existence of the heliosphere, indicating that the sun’s magnetic field extends well beyond the orbits of planets.

IceCube is a research facility at the South Pole that searches for nearly massless subatomic particles called neutrinos. These high-energy astronomical messengers provide information to probe the most violent astrophysical sources: events like exploding stars, gamma-ray bursts, and cataclysmic phenomena involving black holes and neutron stars. The design and development of the detector were only made possible through individuals and institutions known as the IceCube Collaboration, which includes more than 300 people from 56 institutions in 14 countries, including UWRF.

REU students receive a stipend and funding to cover their travel and living expenses at UWRF. Students, who come from around the country, acquire research skills that are transferrable to many science, technology and engineering fields.

“We have been fortunate to get a significant amount of NSF-support for research projects, and almost all of those funds support students,” he said. “That’s important to me. I’m not just doing research alone in my office. I’m surrounded by students doing research in a meaningful way. We’re involving them in research where they get paid to do research, collaborate with other researchers and present their work at local and regional conferences. They also get to network with scientists in the field.”

Hibbert, of Maribel, a senior graduating in May, said the paid internships covered the costs of staying on campus over the summer.

“It allowed me to focus on the internship rather than have to work a job and work on the internship,” Hibbert said. “You are doing something you love and is relevant to what you want to be. If you have the opportunity to take internships whether they are on- or off-campus, go for it. It can be fulfilling and is a great resource.

“It was an amazing opportunity,” Bowers said. “It allows the ability to network. Gretchen and I made great connections with professionals across the work.”

They both also were able to work with their peers across the world and develop camaraderie in their research.

“When we can go, we spend 1 ½ weeks doing maintenance and calibration work on the neutron monitor,” he noted, adding a student usually travels along to experience the research. The equipment during the pandemic has been maintained by researchers who spend the winter at the South Pole.

“It is very cold, and I would imagine it is the closest thing to being on another planet,” Seunarine said, noting the station is the only structure. “As far as you can see on the horizon is flat, white ice and you are standing on 10,000 feet of ice.”

In February, temperatures plummet to 30 to 40 degrees below zero with windchills of nearly 70 below zero.

“You are well prepared with clothing for the cold,” Seunarine said. “The thing that is difficult is you are not prepared for the altitude and the lower oxygen levels.”