May 9, 2022 – Samira Teymurova traveled 20 hours one way by plane from her home country of Azerbaijan to see her son, Jamal Teymurlu, walk across the University of Wisconsin-River Falls commencement stage May 7. 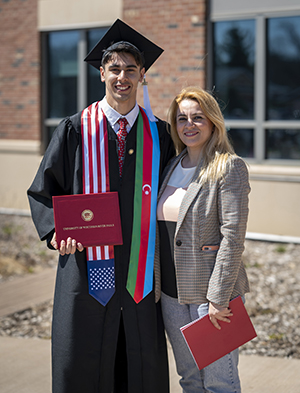 Her son, who graduated with a degree in applied physics engineering, fulfilled a dream his mother had for herself, to study in the United States.

“I wanted to study in the U.S.,” Teymurova said. “I didn’t have the opportunity. He kind of continued my dream. That’s why I wanted to see him in the gown and graduate. Graduation is very important in our family.”

In Azerbaijan, Teymurova is a principal in the Baku Modern International School.

“I’m really proud of him,” she added smiling. “That’s a serious major he chose. He did it. Well done,” Teymurova added, patting her son’s hand fondly.

Teymurlu plans to stay in River Falls and is applying for work permits. He wants to work in the industry, and potentially the aerospace industry.

“I want to stay in this country,” he said. “It’s a country of opportunities, especially for work. I want to live the American dream.”

Eventually, he plans to return to school for a master’s degree in the field of sports management.

“I think having two different degrees gives you more options,” he said.

Clark described Teymurlu as outgoing, welcoming and mindful of others he meets.

“Jamal is a person you want to have in your community,” Clark said. “He is a big-hearted individual who is open to conversations and erudition while being willing to share information about his experiences and culture, which is why I believe Jamal has enriched the UWRF community. The exhibition of his style kind of showed a new flare that you don’t see on campus too often. And it’s going to be hard to forget his contagious and memorable smile that can light up a room.”

Stage and Screen Arts Professor Erik Johnson met Teymurlu in a 48-hour film competition. He is also a student in Johnson’s History of Film class.

“We are so lucky to have had Jamal as a student at UWRF,” Johnson said. “He has shared his passion for film in class. He is very charismatic and has a bright future.”

Teymurlu did have the opportunity in spring 2020 to study abroad in Scotland. The trip was cut short because of COVID-19 restrictions, and he returned to Azerbaijan. He returned to UWRF in fall 2020 for classes and was able to visit again in summer 2021.

Azerbaijan, which is independent and democratic, is located at the boundary of Eastern Europe and Western Asia, bounded by the Caspian Sea to the east with a population of 10.11 million and the language is a dialect of Turkish.

Teymurlu was part of EducationUSA, a U.S. Department of State program that promotes higher education to students around the world. He traveled to the U.S. while in high school for a summer camp and visited Florida.

“I decided I wanted to go to a college in the U.S.,” he said. “I like the democratic life where you get to choose your general education classes. I wanted to be independent and make new connections.”

He learned of UWRF in fall 2017 from EducationUSA.

“One day he came back with a booklet about UW-River Falls,” Teymurova said. “I hadn’t heard of Wisconsin. I could barely pronounce it. We started researching it. It was scary. I was afraid it would be really cold.”

Teymurlu at first thought he was applying to UW-Madison because he did not know there were different colleges in the UW System and questioned why there was a Falcon as the university mascot versus Bucky Badger.

“I saw how affordable it was and I saw the program,” he said. “For me, it is a second home now.”

His father, Mahmood Teymurov, liked the country and the more rural setting of the university and encouraged his son to attend UWRF. Teymurlu also has a sister, Nargiz Teymurlu, who has visited UW-River Falls, and is graduating from high school in Azerbaijan this year.

Teymurlu never visited campus before arriving to take classes when he was 17 years old.

Azerbaijan has 11 years of school versus the U.S.’s 12 years.

His mom traveled with him when he started at UWRF, and she is now on her fourth trip to UWRF.

“I needed to see the community and campus and where he would stay,” she said. “When I saw the environment and I met with the chancellor, I was impressed how supportive the campus was to international students and I saw the care.”

Teymurlu said he is pleased his mother attended his commencement and is proud he is graduating from UW-River Falls.

“I did this,” he said. “I didn’t let them down. For my family, and for myself, education is very important.”