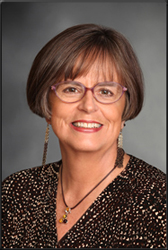 Sept. 18, 2015 — Florencia E. Mallon, Julieta Kirkwood Professor of History at UW-Madison, will speak at the University of Wisconsin-River Falls on Tuesday, Oct. 6, as part of the annual Edward N. Peterson Lecture Series. The lecture will begin at 4:30 p.m. in the Kinnickinnic Theater in the University Center and will be preceded by a reception at 4 p.m.

Mallon’s reception and lecture, “From Hemisphere to Country: A Genealogy of ‘America’,” are free and open to the public.

Using Michel Foucault's methodology of "archaeology" and "genealogy," her lecture explores how the utopian notion of "America," initially applied to the full Western Hemisphere, is transformed within the emerging nation of the United States. The conflictive interaction between the idea of the "American people" and the idea of the "states," where the notion of "America" denotes a utopian form of union, is first developed productively in "The Federalist." Subsequently it becomes a bone of contention, not only in the tensions resulting from U.S. territorial expansion, but also into the conflicts resulting in the Civil War. Finally, during the Spanish-American War (1898), when the United States occupied the Philippines, Cuba and Puerto Rico, the utopian notion of "America" is once again deployed when the U.S. presence in the Caribbean and the Pacific is articulated to a vision of the United States—increasingly self-defined as "America"—as a new world power that protects emerging nations from European imperial domination.

Mallon's lecture is one of the many events featured in UWRF's Year of Mexico. The “Year of” program that is part of the global initiative of the university's strategic planning and an effort to apply a multidisciplinary approach to better understand and appreciate the cultures of different nations in the world, such as Germany, China, Mexico and Brazil.

Mallon’s research and teaching interests include Latin American History of the 19th and 20th centuries, especially Mexico, Peru, and Chile.

Professor Edward N. Peterson taught history at UWRF from 1954 until his death in 2005. To honor his memory and his achievement in teaching and research, the UWRF History and Philosophy Department established the Peterson Lecture Series program as an annual forum for leading scholars to present their scholarship on war and peace, abuses and limits of power, and the struggle for democracy in the 20th century, issues that Peterson taught about and wrote about during his long career as a historian. The series is funded by an endowment made possible by the generous donations of students, alumni, faculty and friends, collected over many years.