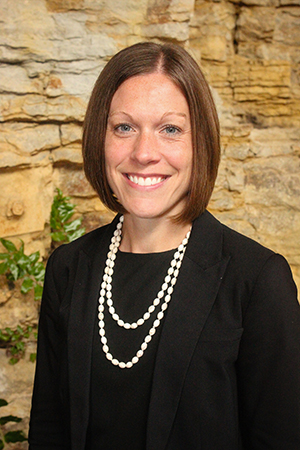 March 19, 2018 – Crystal Lanning has been named director of athletics at the University of Wisconsin-River Falls. Lanning, who has served as interim athletic director since 2016, will assume her permanent duties April 1.

"I am confident that Crystal will continue to provide outstanding leadership for Falcon athletics and serve as a valuable member of cabinet and the university’s leadership team," said UW-River Falls Chancellor Dean Van Galen.

Lanning will lead a department which offers 17 NCAA Division III programs and has over 40 full-time, part-time and volunteer staff. She will oversee all facets of the Athletic Department including operations, budget, marketing and fundraising initiatives.

"I am truly honored for the opportunity to serve the Athletics Department as the director of athletics,” Lanning said. “I look forward to continuing to work with our coaches, staff and student-athletes and building relationships with our alumni and campus and community partners.”

At UWRF, Lanning manages the Athletic Department’s Title IX compliance efforts and strategic plan and is a member of the Chancellor’s Cabinet, Foundation Development Team and Faculty Senate Athletic Committee while also chairing the Athletic Hall of Fame Committee. She served on the design team for the new Falcon Center for Health, Education and Wellness and is also a member of the facility’s operations committee.

Lanning worked as assistant commissioner for membership services for the Northern Sun Intercollegiate Conference (NSIC) in 2015-16. She oversaw the operation of the NSIC’s soccer, volleyball, baseball and women’s swimming and diving competitions and assisted with the men’s and women’s basketball tournaments. She also oversaw implementation of the conference’s 2014-19 Strategic Plan and served on the NCAA Division II Women’s Soccer Central Region Advisory Committee.

Lanning is a resident of Hastings, Minn.