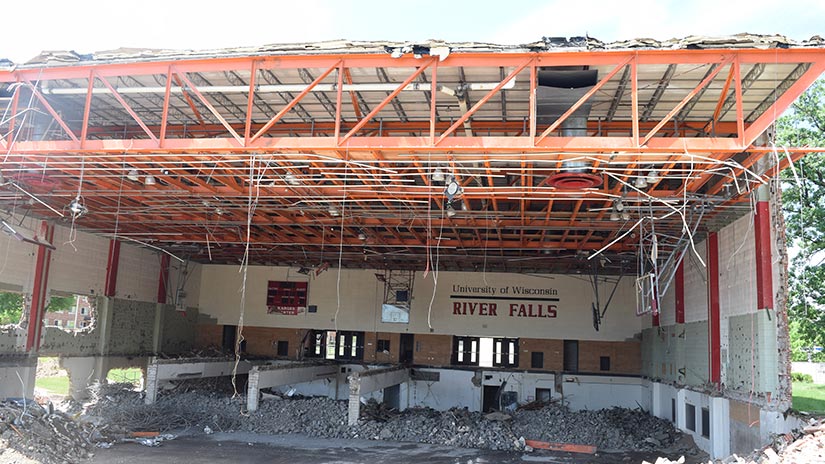 June 19, 2018 - With assistance from some heavy machinery, the final wall of the long-standing R. A. Karges Center at UW-River Falls came tumbling down June 13. Deconstruction of Karges Center began May 21 and while the above-ground walls have come down, site clean-out will continue through July.

After a few days of site preparation, including the removal of the iconic bronze Falcon sculpture from the north exterior wall of the building, it took crews just over three weeks to tear down Karges Center. Prior to demolition, the sculpture, which had graced the side of Karges Center since 1962, was moved and reinstalled on the Falcon Center for Health, Education and Wellness.

Crews from American Demolition worked their way around the large complex, deconstructing the former swimming pool, racquetball court, classrooms and offices, before finally dismantling the gymnasium. Mementos from the building’s past, ranging from scoreboards to wrestling mats, were revealed to onlookers during the deconstruction.

Workers will continue work to remove and recycle debris from the building and will fill and grade the site. After completion, the area will become green space for student and university use, both emphasizing UWRF’s commitment to sustainability and contributing to the aesthetic beauty of campus.

The Falcon Center for Health, Education and Wellness opened in September 2017 and serves as the new home for the university’s Health and Human Performance and Athletics departments, two areas that had previously been housed in Karges Center. Deconstruction of Karges is considered the final phase of the Falcon Center project.

Built in 1960, the 58-year old Karges Center was named after Professor R. A. Karges, former faculty member and basketball coach at UW-River Falls. A graduate of the University of Wisconsin-Madison, Karges joined the UWRF faculty in 1908. He coached the men’s basketball team from 1910 to 1912 and taught chemistry until his retirement in

1951. He was a familiar figure on campus and attended most of the home football and basketball games. He took part in laying the cornerstone for Karges Center in 1959.

The now-demolished Karges Center housed several areas dedicated to physical activity and varsity athletics. Karges Gym seated nearly 2,500 spectators and served as home to UWRF’s volleyball and men’s and women’s basketball teams. Karges also housed a 75’x45’ dance studio that was fully equipped to function as both a classroom and performance space.

In addition to recreation areas, Karges was home to several classrooms and offices for the Health and Human Performance Department.