December 13, 2013— The IceCube telescope has been awarded the 2013 Breakthrough of the Year by the British magazine Physics World. The Antarctic detector was selected for being the first to detect cosmic neutrinos and heralding a new age of neutrino astronomy, but also for overcoming the many challenges of creating and operating such a huge detector at the South Pole.

The University of Wisconsin-River Falls has been a member of the IceCube Collaboration and its predecessor AMANDA since 1998. Four physics staff members and three students have deployed to Antarctica for research. More than fifty undergraduates have worked on this project at UWRF in the last 15 years.

"This is an incredible achievement, and a testament to what passion and persistence can accomplish," said UW-River Falls Physics Department Chair Jim Madsen, and associate director of the IceCube project leading the education and outreach efforts.

The IceCube Neutrino Observatory was completed in December 2010, after seven years of construction at the South Pole. But the idea of a huge detector buried in the ice was conceived a long time ago. The first sensors of AMANDA, a prototype detector designed as a proof-of-concept for IceCube, were installed in the ice in 1993. By the end of 2004, the first sensors of IceCube had already reached 2,450 meters below the Antarctic ice sheet. It was only a few weeks ago that the IceCube Collaboration published in Science the first evidence for a very high-energy astrophysical neutrino flux, opening a new era in astronomy.

Building a cubic kilometer detector at the South Pole seemed outlandish for a while, and turned out to be an ever-growing yet exciting challenge for the many people involved. Neutrinos had been proposed as the perfect cosmic messengers back in the 1960s. Because they very rarely interact, neutrinos are expected to bring information to earth from the deepest recesses of the universe. It's only in such extreme environments like black holes and neutron stars that the most energetic particles ever observed, the so-called ultra-high-energy cosmic rays, could have been produced. The bad news, however, was that a huge detector was needed to catch those neutrinos even in small numbers.

"I did not imagine that the science would be as exciting as building this detector," said Francis Halzen, principal investigator of IceCube and the Hilldale and Gregory Breit Professor of Physics at the University of Wisconsin–Madison. "Challenges were many, from deciphering the optical properties of ice that we have never seen to drilling a hole to 2.5 kilometers in two days, and then repeating 86 times. Only the dedication of very talented individuals made this possible."

As Halzen first envisioned, the ice became the perfect medium to search for very high-energy neutrinos that, after travelling through the universe during millions—even billions—of years, haphazardly interact with the nucleus of a molecule of ice. The faint blue light produced from this interaction, known as Cherenkov radiation, is recorded by IceCube's sensors in the clear and dark depths of Antarctica's ice sheet.

"We made the impossible seem easy," can be read on a wall at UW-Madison, quoting one of the driller technicians who helped make this telescope a reality. One challenge after another was overcome, and once the full detector was operational, the science results were even more incredible. The first neutrinos from outer space have been observed, and IceCube is honored to head the list of 2013 physics breakthroughs, but the best might be yet to come.

IceCube is comprised of 5,160 digital optical modules suspended along 86 cables embedded in a cubic kilometer of ice beneath the South Pole. The IceCube Neutrino Observatory was built under an NSF Major Research Equipment and Facilities Construction Grant, with assistance from partner funding agencies around the world. The NSF's Division of Polar Programs and Physics Division continue to support the project with a Maintenance and Operations Grant, along with international support from participating institutions and their funding agencies. UW-Madison is the lead institution, and the international collaboration includes 275 physicists and engineers from the U.S., Germany, Sweden, Belgium, Switzerland, Japan, Canada, New Zealand, Australia, U.K., Korea and Denmark.

"The ability to detect cosmic neutrinos is a remarkable achievement that gives astronomers a completely new way of studying the cosmos," says Hamish Johnston, editor of physicsworld.com. "The judges of the 2013 award were also impressed with the IceCube collaboration's ability to build and operate a huge and extremely sensitive detector in the most remote and inhospitable place on earth."

Physics World will be hosting a Google Hangout at 10 a.m. US Central Time this morning with Halzen, Johnston, and James Roth, a member of the IceCube Collaboration and a senior electronics instrument specialist at University of Delaware. The event may be viewed live on both the Physics World Google+ page and the Physics World YouTube channel.

For more information on the IceCube project, contact Madsen at 715-425-3235 or email james.madsen@uwrf.edu. 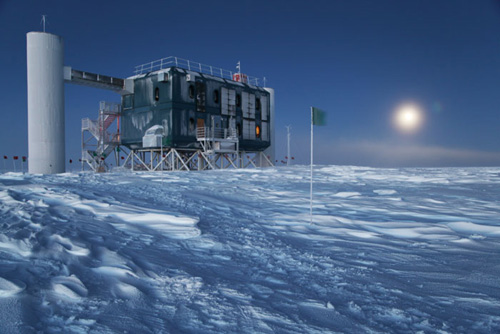