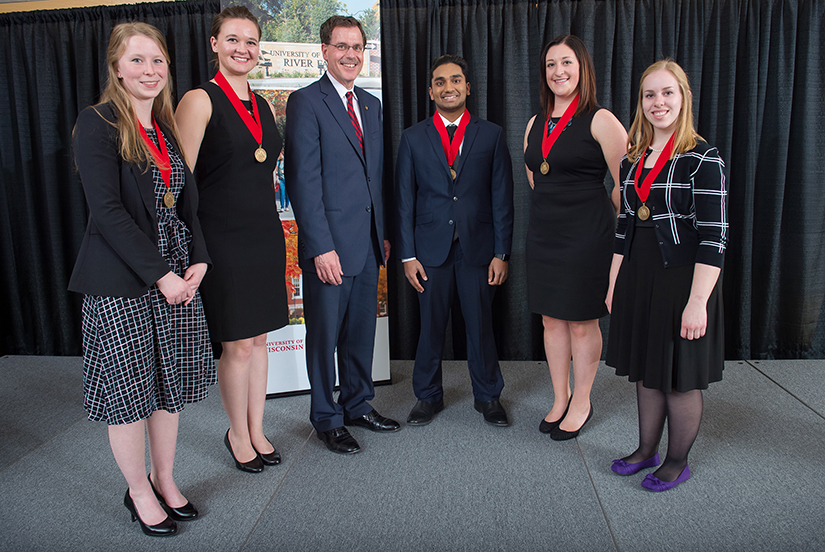 May 7, 2018 – University of Wisconsin-River Falls Chancellor Dean Van Galen presented awards to five students April 26 at the University Center. The Chancellor’s Award for Students is the highest non-academic honor a UW-River Falls student can receive. Recipients earn the award by showing distinguished leadership and service during their time on campus.

“Many of these recipients will surely go on to be leaders, serving locally and globally in many ways,” Chancellor Van Galen said. “The diverse backgrounds of this year’s group of honorees are a testament to the fact that our university’s commitment to global engagement, citizenship, and inclusivity is strong.”

Alanna Bram (junior from Rochester, Minn.) – Bram plans to graduate in May 2019 with a double major in biology and Spanish, with a minor in chemistry. She has studied internationally in Seville, Spain, and in turn has supported and mentored international students at UWRF. Bram has also served her peers as a team learning leader and teacher’s assistant and has served campus working in UWRF’s New Student and Family Programs office as well as representing the university as a Chancellor’s Student Ambassador. She is a member of Phi Kappa Phi, the Pre-Health Society and Campus Intervarsity. An extremely well-rounded student, Bram has performed in the UWRF Symphony Band and presented undergraduate research at the Howard Hughes Medical Institute Sea Phages symposium. She also founded the UWRF Shoe Away Hunger Drive which collects shoes from community members that are then sold to raise money to feed needy families.

Zain Kaiser (junior from Lakeville, Minn.) – Kaiser plans to graduate in 2019 with a double major in computer science and geography/GIS. He lived in Singapore until age ten and speaks four languages; English, Hindi, Urdu and Mandarin Chinese, a personal perspective which has allowed him to become a welcoming and supportive mentor to UWRF’s international students. He is a member of the Phi Kappa Phi honor society and has engaged in undergraduate research, working on a cluster computing project that directly benefits fellow students. He also participates in the UWRF “Love Your Melon” group which benefits pediatric cancer patients, and volunteers at “Be the Match” bone marrow registry drives, Feed My Starving Children and Habitat for Humanity. Kaiser also promoted student safety and bystander intervention programs while serving as a senator on the UWRF Student Government Association and represented UWRF in Washington D.C. to help lobby on student issues.

Samantha Pedek (senior from Muscoda) – Pedek, one of UWRF’s Falcon Scholars, is a first-generation college student and will graduate May 12, the first member of her family to earn a college degree. She has worked with the IceCube Neutrino Observatory and has traveled to McMurdo Station in Antarctica and the South Pole for her research. She has also done undergraduate research through Stockholm University in Sweden and at NASA’s Goddard Space Flight Center. She is treasurer, vice president and regional representative for UWRF’s Society of Physics Students club and twice presented at the Women in Physical Sciences Conference. Pedek has supported her peers as a learning assistant and actively engaged in public outreach in the community. She has volunteered at “Girls in STEM” events which encourages middle and high school girls to consider pursuing careers in science.

Kristy Strain (junior from Rochester, Minn.) – Strain plans to graduate in 2019 with a double major in accounting and business administration with a management option. She is active in Phi Kappa Phi, Beta Sigma Gamma and the UWRF Accounting Society, which she serves as president. She is a Chancellor’s Student Ambassador and is on the UWRF First-Year Leadership Development and Service Committee. She has made contributions to improving the admissions process for prospective student visitors through her work with the UWRF Admissions office. She has volunteered at both Allina Health and Hospice and Hudson Hospital and Clinic, working with patients in challenging states and serious illnesses. Strain has interned with Clifton Larson Allen LLP in Minneapolis and also secured an internship with the River Falls Area Hospital. She will travel to Europe as part of UWRF’s Semester Abroad campaign in the fall where she will study the Austrian health care system.

Abby Wendt (senior from Green Bay) – Wendt will graduate May 12 with a double major in business administration and marketing/sales and a minor in communications. She has served campus as an elected student leader since her freshman year and is currently president of the UWRF Student Government Association (SGA). She also served the SGA as finance committee chair. She has represented the university on several UW System and State of Wisconsin legislative initiatives addressing student fee allocation policies and compliance, criminal background disclosure and freedom of expression. She has helped organize campus-wide events such as Mental Health Awareness Week and De-Stress Fest as well as the It’s on Us campaign against sexual harassment. Wendt has studied abroad and is a staunch advocate on issues concerning diversity, community and self-care. She is also a member of the Professional Sales Club and DECA through which she has competed in regional, state and national competitions.

For more information about the Chancellor’s Award for Students, email beth.schommer@uwrf.edu or call 715-425-0662.