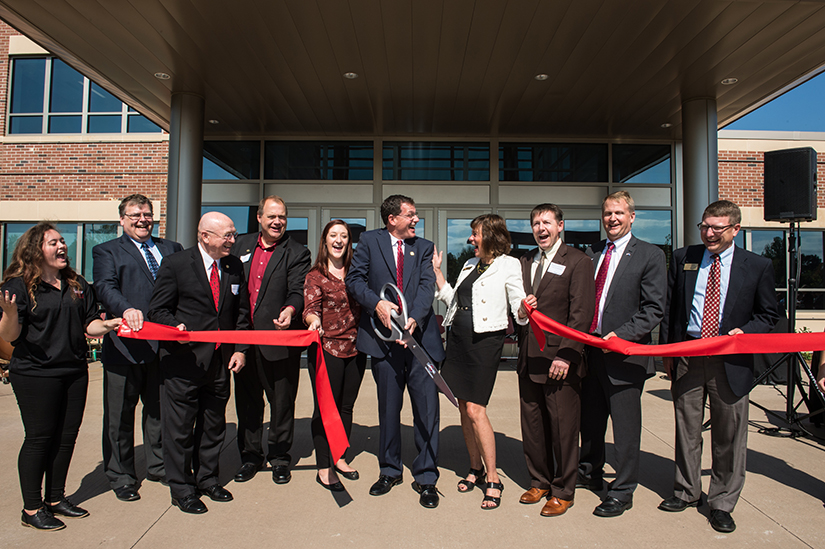 September 21, 2017--The University of Wisconsin-River Falls opened the $63.5 million Falcon Center for Health, Education and Wellness to the public on Thursday. At an afternoon ribbon cutting, local officials and university dignitaries celebrated an accomplishment many years in the making, and one which will have a profound future impact on the campus educational experience.

“So many individuals and groups have worked tirelessly to envision, plan, advocate for, secure, build and operate the Falcon Center,” Van Galen said. “It has been a true team effort, spanning many years. To all of you I say thank you -- the tremendous impact that the Falcon Center will have is part of your legacy.”

“The Falcon Center is not merely another building on campus,” said Wisconsin Senator Sheila Harsdorf (R-District 10). “It’s a facility that will have a significant impact on this community and the region as it attracts students, shapes their educational experience and influences their career choices.”

“It’s so beautiful now, but in a hundred years, what will this building look like?” UW System President Ray Cross asked. “What will its legacy be? It won’t be the building -- it’s what goes on in the building, and the lives that will be changed by what this building permitted (them to accomplish). That’s a wonderful heritage here.”

“The new Falcon Center will address classroom capacity, allow the campus to better integrate technology into the curriculum, and expand research opportunities for students,” UW Regent President and UWRF graduate John Robert Behling said. “This campus has come so far…it’s a gem and I’m so proud of it.”

“It (the Falcon Center) represents the priorities UW-River Falls has for its students’ health and wellness,” said UW-River Falls Student Government Association President Abby Wendt. “Without the students, this building would not be here today. We’re excited for the opening of Page Arena, the new workout facilities, and we’re really excited for the new job opportunities (a UWRF education will help create).”

The Falcon Center replaces the R.A. Karges Center and the Emogene Nelson Center, both built in the early 1960s. It houses the university’s health and human performance, campus recreation and athletic departments.

For more information about the Falcon Center, visit www.uwrf.edu/FalconCenter/.