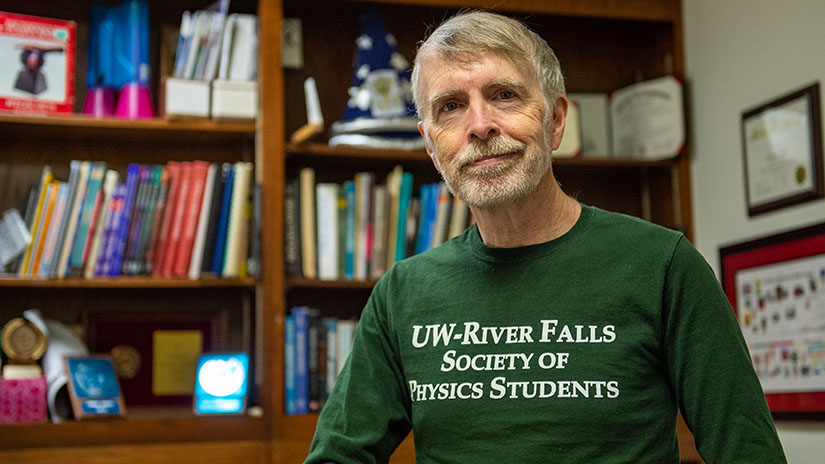 When his older brother enrolled at UW-River Falls, Earl Blodgett proclaimed that he wanted to go there too and “right now.” He was three years old. To say that UW-River Falls has been a part of the fabric of his entire life is really not an understatement. His mother began her coursework at River Falls State Teacher’s College in 1938. She worked and raised a family and was able to chip away at her coursework, completing her degree in 1968 at Wisconsin State College-River Falls. Earl tagged along with her to campus when she’d attend summer school.

Earl’s love of physics began in the third grade when his older sister was a physics major at UWRF.

“She’d come home and talk about what she was studying and got me hooked,” he recalls.

Earl took classes at UW-River Falls in the summer between his junior and senior years of high school. After enrolling, he studied under Curt Larson, Neal Prochnow and John Shepherd who were building the foundations of one of the best physics programs in the country. When he wasn’t studying or participating in The Society of Physics Students or Sigma Pi Sigma events, Earl was running. He was part of the cross country and track teams. Not surprisingly, he was named a conference scholar athlete twice. In fact, if you pay a visit to his office, you’ll find the running shoes he wore during his time on the team.

After UW-River Falls, Earl earned his masters and doctorate degrees from Washington University in St. Louis.

“While I was at Washington University, I was a teaching assistant and loved it,” he said.

After graduation, he faced a choice of doing research or teaching.

“I took a look at the reward/benefit balance and decided I wanted to be close to home, so I came to UWRF,” Earl said.

He lives on the family farm near Boyceville with his wife, who he met while attending UWRF. They have three children, all UWRF graduates. When he’s not on campus, Earl enjoys running 30-35 miles a week and is an amateur musician, playing the trumpet, piano, baritone and recorder.

Throughout his nearly 34 years at UWRF, Earl has been a fixture in the Physics Department and with The Society of Physics Students and Sigma Pi Sigma. He has received several awards from both organizations including honorary membership in Sigma Pi Sigma, whose previous recipients include Nobel Laureates.

If there’s any activity that can get students excited about science, it’s very likely Earl is part of it. He’s been involved in the Science Olympiad on campus for nine years. The competition brings 60 teams of high school students to campus each January.

“I really enjoy having the Science Olympiad students come to River Falls because it’s very challenging. Many of the events are things that they do not see in any class. They have to learn it on their own. They get started on the independent learner process, how to put in the time to be successful,” he notes.

When asked what the most rewarding thing about working at UWRF is, he cites the people and commitment to students.

“The people are the most rewarding,” Earl said. “They all care about students and student success and make it a priority."