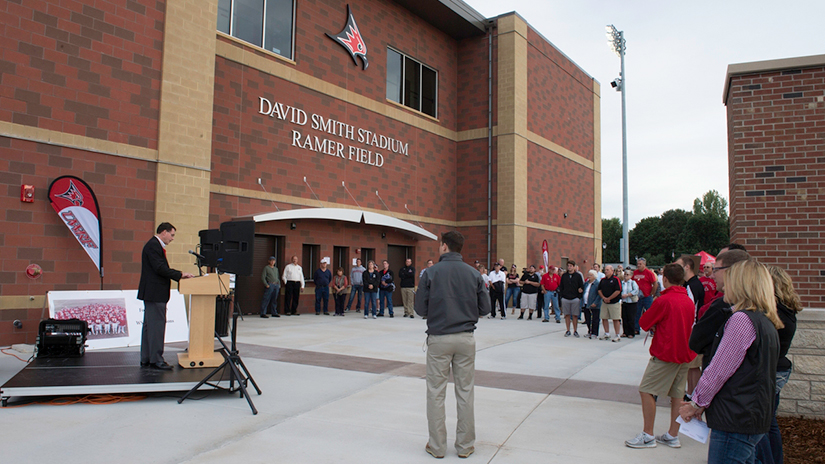 September 19, 2015--Eight years of planning, fundraising, and construction culminated in the rededication of David Smith Stadium at Ramer Field Sept. 19, on the campus of the University of Wisconsin-River Falls. Members of the Smith family, along with UWRF students, alumni, and administrators were on hand to celebrate the new facility and thank the numerous donors who made the $1.9 million renovation project a success. The project was fully funded by private gifts and student fees.

During the ceremony, UW-River Falls Chancellor Dean Van Galen lauded the “uncommon generosity” of the more than 250 donors who made the stadium project possible. The David Smith family and First National Bank of River Falls provided the lead gift for the project, which included a state of the art press box, new entrance plaza, and turf field. Smith served as president and CEO of FNBRF until his death in 1994.

“Many people played a role in this project, but we wouldn’t be here without the generous gift from the Smith family and the First National Bank of River Falls,” Chancellor Van Galen said as he thanked the donors who made the project possible. “It is a privilege for this university to honor David Smith and his family for their generous support.”

David Smith’s daughter, Sandy Smith Wurm, spoke on behalf of the Smith family, thanking fellow donors and sharing her family’s excitement: “The wait has been worth it. We are just in awe,” she said. “If my dad were here, he’d want to thank so many people for the memories, so many memories of coaching and friendship.”

Welcoming fans to the stadium is the newly constructed Champions Gate, which honors the offensive line of the 1980s, a unit that won four straight conference championships and contributed a significant fundraising effort to the project. The Zimmerman Gateway is named in honor of Shannon and Angel Zimmerman, recognizing their leadership gift, and the newly minted donor plaza, which sits south of the press box, includes engraved bricks honoring donors who made significant contributions to the project. Bricks are still available for purchase at www.uwrf.edu/giving.

In addition to thanking donors, Chancellor Van Galen praised the project’s long term effects.  “This represents a major step forward for UW-River Falls, the River Falls School District, and our community. It will enhance the experience of student-athletes and will have an impact for many years to come.” Van Galen added that the stadium will “transform UWRF’s south campus and provide some of the best wellness and athletic facilities in the UW System.”

“We are so fortunate to experience these facilities. This stadium and this project will change the face of our athletic department and university forever,” head football coach Matt Walker echoed Chancellor Van Galen’s sentiments on the impact and value of the new facilities. “It wouldn’t be possible without the generosity of the Smith family and all of the donors and we are grateful to share in this experience.”

For more information on the Smith Stadium at Ramer Field project, call University Advancement at 715-425-3505 or email alumni@uwrf.edu.