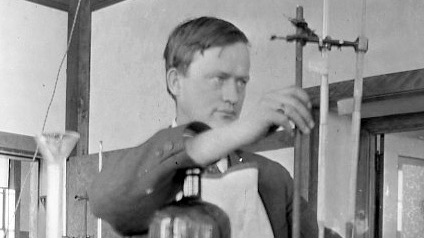 Dr. Karges works on a chemistry experiment in 1918.

I was recently in Mesa, Arizona, for a UW-River Falls alumni event. It's a winter trek to the Southwest desert that UWRF Chancellors have been making for the last 23 years, I am told. Every year, our alumni relations office (led by "Mr. UWRF" Dan McGinty) hosts a gathering in Mesa for alumni who live in Arizona or are "snow birds" who spend part of the year there to escape the Wisconsin winter.

The annual Arizona alumni event is one of my favorites of the year, not because it's in Arizona in the winter (although it was great to get in an early morning 5k in running shorts and a t-shirt), but because of the 30-50 people who routinely attend the event. To say there is a lot of UW-River Falls history in the room is an understatement. At this year's event, attendees ranged from retired attorney and major scholarship supporter Chuck White, who was a student at the university (then the River Falls State Teacher's College) in the mid 1940s, to 2013 graduate Zach Rossow. While there are  always a few younger alumni like Zach at the Mesa event, the majority of attendees are in their 70s, 80s, and even 90s.

If you have any doubt that our graduates love the university, just attend this event. Our older alumni, in particular, have a deep awareness of how the university has affected their lives and possess an overwhelming sense of pride in the university. They are impressed by how the physical campus  has changed since the days when the only main campus buildings were North Hall and South Hall and, most of all, they are extraordinarily impressed with what today's faculty, staff and students are doing. That was reinforced this year when physics Professor Dr. Jim Madsen joined the Mesa event and gave an amazing presentation on the IceCube Project and how our students have traveled to Antarctica to participate in this fascinating research endeavor.

This year, there was a moment I will not forget. I was speaking to the group about the new Falcon  Center and how this new facility will transform our health and human performance program, student wellness, and Falcon athletics. During the question and answer session, Vaughn Hoffman, a 1954 graduate, raised his hand and asked the simple question:  What will be done with the Karges Center? I explained that it would be  expensive to heat and provide custodial service to this 1959 era building and that it would be deconstructed next year. Vaughn seemed troubled by my answer, so I went on to mention that we have  named the new auxiliary gym in the Falcon Center in honor of Dr. Karges. I was relieved when a smile appeared on Vaughn's face, and I went on with my presentation.

After the formal program ended, Vaughn approached me and shared his memories of Dr. R.A. Karges or "Kargie" as he was affectionately known to students at the time. Vaughn explained that Dr. Karges, who joined the faculty of River Falls Normal School in 1908, was a wonderful person, full of energy, and was such a sports enthusiast that he simply could not sit still at the basketball games in North Hall. He told me how much he appreciated that Dr. Karges would be remembered and honored in the new Falcon Center. It was clear that Vaughn cared less about the Karges Center building, and much more about honoring Dr. Karges for his impact on the university and him personally.

The story of how Dr. Karges's life was connected with our institution continued even after his retirement in the early 1950s. He personally helped lay the cornerstone for the Karges Physical Education Center in 1959, and then on Dec. 2, 1964, somehow fittingly, died at the age of 83 of a heart attack at the entrance of the  building named in his honor. In the words of former UWRF President Kleinpell, Dr. Karges "combined in a single  personality the most admirable of all attributes of a teacher." More about Dr. Karges, who was truly a renaissance man, can be found here.

I am grateful to Vaughn Hoffman, '54, who continues to care about the legacy of the people who played a key role in his life. He reminded me that we are all stewards of an institution that has, since 1874, educated students and impacted lives. Indeed, all of us at the River Falls Normal School (now the University of Wisconsin-River Falls) stand on the shoulders of giants, and we must lead and serve with a spirit of humility and a commitment to good stewardship.