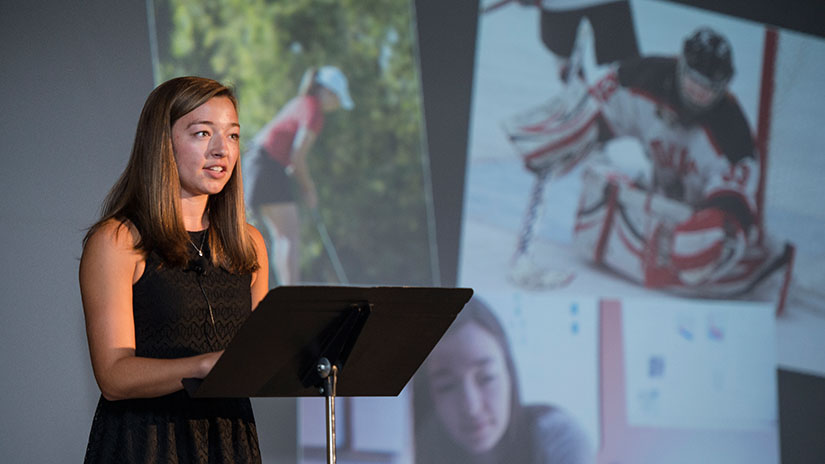 Gillian McDonald, 2015 graduate and Falcon Scholar, spoke about the impact of scholarship support during the Rising to Distinction campaign celebration on Sept. 23.

Chancellor's Blog: The Enduring Power of Education and Philanthropy

As chancellor, I attend and speak at many events. Although a mentor of mine, a former university president, once quipped that the role of a university president is mostly to talk and eat – and there may be a grain of truth in that! – today I would like to share how profoundly impacted I was by a recent event on our campus. This event caused me to reflect deeply on the power of education and philanthropy, and I would like to share those reflections with you.

On September 23, we celebrated the successful conclusion of Rising to Distinction, the university's first comprehensive fundraising campaign. The Riverview Ballroom was filled with dozens of donors and supporters, including alumni and friends, volunteer leaders, and UW-River Falls students, faculty and staff.  By this time, we already knew that we'd met the campaign's $20 million fundraising goal six months ahead of schedule, so the celebration event became an opportunity to share the final, numerical outcomes of the campaign: more than $21.9 million had been raised, including over $10.3 million for student scholarships, and these funds had been gifted to the UWRF Foundation by 10,452 distinct donors.

What left an impression more lasting than those numbers, however, was hearing the stories of Bailey Vitek, a senior biology major, and Gillian McDonald, a 2015 UW-River Falls physics graduate. They spoke from the heart about how scholarship support has impacted them. Because of the support of the John E. Butler International Research Endowment, Bailey was able to conduct laboratory research at a federal research institute in Jena, Germany, an experience that built her confidence and redefined her career plans. Gillian, who entered UWRF in 2012 as part of the first freshman class of Falcon Scholars, spoke about her undergraduate research on Quantum Entanglement and Optics (yes, think of the TV show "Big Bang Theory"). She graduated from UWRF in three years with a degree in applied physics, and is now in a Ph.D. program in mechanical engineering, researching medical robotics. It was clear from the remarks of Bailey and Gillian that the generosity of others has changed and shaped their lives in powerful ways.

It was a special evening. We celebrated a milestone in the university's 142-year history and thanked those who made it possible. Most importantly, we were given a chance to pause and reflect on the tremendous impact that simple acts of philanthropy will have on the university for decades to come. Imagine ... the thousands of current and future UWRF students who will have opportunities because others were generous. Imagine … if the first River Falls Normal School President Warren D. Parker, and the eight faculty and 130 students who opened this institution on Sept. 2, 1875, could have been there to see what the old normal school has achieved—surely they would have been amazed and proud.

Perhaps the highest form of giving, of philanthropy, is when people give of their personal resources to help others they do not know, or may never meet. We do that because of a deep belief, in this case, a belief in the value and impact of higher education.

On behalf of many, I express my gratitude to those who have supported the Rising to Distinction campaign, individuals who clearly believe in the enduring power of education and philanthropy.