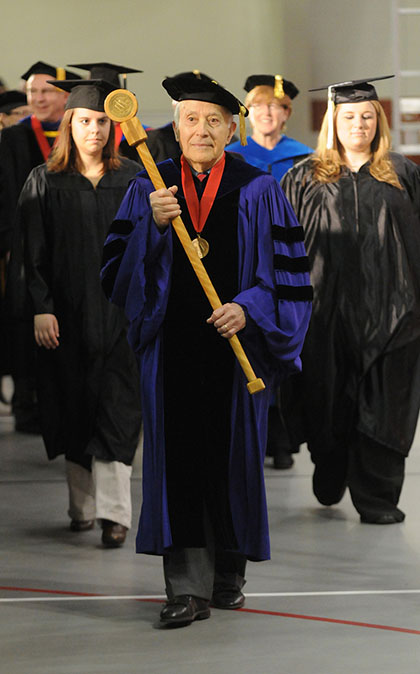 On Saturday, Mary and I attended a Celebration of Life honoring Dr. Nick Karolides. Nick, a UW-River Falls professor emeritus of English, passed away June 7. I was honored to be asked by the family to say a few words as family, friends, colleagues, and former students gathered to celebrate his life.

Over the past nine years, Mary and I have had the opportunity to develop a friendship with Nick and his wife Inga. There are many good memories. I will never forget how Nick served as the faculty marshal (a role reserved for the university’s longest serving faculty member) for many years, leading the commencement processional with great dignity. Despite his modest stature, Nick always called the commencement ceremony to order with a vigorous banging of the university mace on the stage floor in the Knowles Center (and, I suspect he enjoyed that moment more than he let on).

I also remember the day in July 2011 that Dr. Karolides gave me a book that I keep in my office—a book that he authored titled “Banned Books:  Literature Suppressed on Political Grounds.” Nick was a vigorous advocate for the free sharing of information, ideas, and opinions, and understood the dangers of censorship and limited access to the universe of even controversial ideas.

Nick and Inga have also demonstrated their commitment to UWRF and its students by establishing and generously supporting scholarship funds in the UW-River Falls Foundation for English education majors and students participating in an education abroad program in Europe. Patrons of the arts, they also established a fund to support UWRF music department sponsored concerts. I certainly invite others to join Mary and me in honoring Nick’s legacy at UWRF by making a gift to one of these funds.

Nick joined the faculty in 1964 of what was then Wisconsin State University-River Falls. Over the years, many alumni have told me that Dr. Karolides inspired them and enabled them to see the world in new ways. He was an outstanding teacher, a dedicated scholar, and a true citizen of the university. Moreover, he was a kind, wise, and gentle soul. It was, I believe, the combination of his rare gifts as an academic and as a human being that enabled him to have such a positive impact on thousands of students.

Dr. Karolides was the recipient of the university’s 1971 Distinguished Teacher Award. In acknowledging this honor, the September 1971 Falcon Features described him as:

"Dedicated, helpful, thorough, knowledgeable, flawless in technique are some of the descriptions by students who cast their ballots for Dr. Karolides. 'No one else listened so carefully or tried so hard to understand what students were saying,' commented one student. 'He carries on dialog with students, in the truest sense.'"

Thank you, Dr. Nick Karolides, for the indelible mark you have left on the university - on your colleagues, community, countless students, and on me. You leave a legacy, and you will not be forgotten.