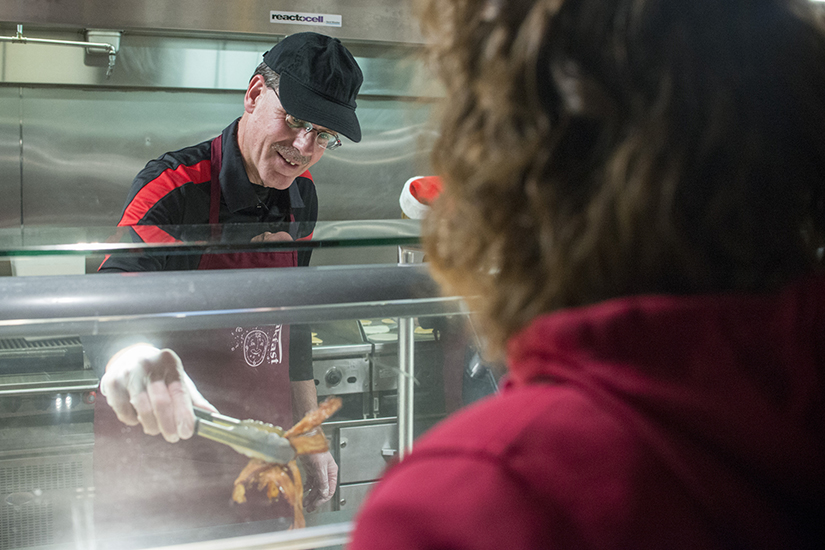 UW-River Falls has some unique traditions, and one of the best is the Chancellor’s Late Night Breakfast. First hosted by Chancellor George Field in 1984, the tradition is for university administrators to serve a hot all-you-care-to-eat breakfast to students one evening during finals week. Now in its 33rd year, the late night breakfast is a simple way to express support for our students during the stresses of final exams.

The event was originally called the Chancellor’s Midnight Breakfast since it was held from 10 p.m. to midnight but, at some point, it seems administrators concluded that they could not stay awake that late, so now it is from 9-11 p.m. For many years before the University Center opened, the breakfast was held in the Blue Room of Rodli Commons. Many students who were at the first breakfast in 1984 are now in their early 50s!

The tradition continued Tuesday evening as 867 UWRF students were served scrambled eggs, breakfast potatoes, breakfast pizza, breakfast sandwiches, and 150 pounds of bacon! This year, I was mostly on bacon duty, flanked by Dean Harris on biscuits and gravy, and Dean Gallenberg serving two different kinds of sausages. Mary, my wife, served in her usual role as the “maker of pancakes,” demonstrating a flair with blueberries and M&M’s. By the way, if you think college students don’t eat much bacon, this event will change your mind. Indeed, there is the “bacon only” crowd of students who come back multiple times. “I’m just here for the bacon” was heard repeatedly in the serving line.

My favorite part of the evening was bantering with students as they went through the serving line—asking them about finals, their hometown, and harassing those wearing Minnesota Vikings shirts (well, that is not so fun this year). As has been the case for the past eight years, this year I was again amazed by how friendly, polite, and genuinely appreciative our students are.

I was thinking at this year’s event…what would this event look and feel like at a place like Harvard, or some other more famous, private university? While I don’t know the answer, I do know that I find the act of supporting – and literally serving – our students to be something in which I take great pride. I like to say that we add more value to our students than many other universities because we offer experiences—including study abroad and research—that are new and transformational to so many of our students. I know that our faculty and staff often change the trajectory of our students’ lives. And, I know that it was a pleasure to serve them some eggs…and lots of bacon, late on a cold December night.