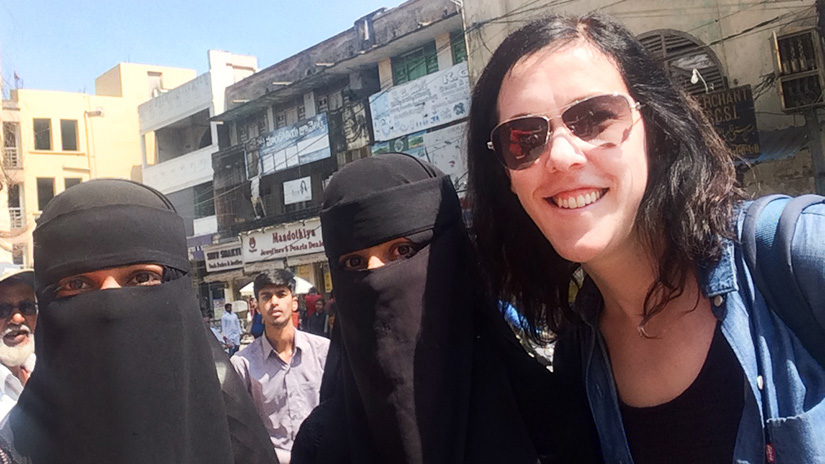 Sociology Associate Professor Paige Miller (right), on a six-month long stint as a gender consultant assisting the International Crops Research Institute in Kenya, was in Hyderabad, India, for a biennial global planning meeting when these women approached her on the street and asked for a photo with her. Miller's work in Africa is providing her with a wealth of experience that will influence her teaching at UWRF.

March 30, 2017--Working amongst legume farmers in Africa, Paige Miller is half a world away from Wisconsin. Despite the distance, Miller's work on another continent is providing her with a wealth of experience that will influence her teaching at the University of Wisconsin-River Falls.

Miller, associate professor of sociology at UW-River Falls, is in the middle of a six-month long stint as a gender consultant assisting the International Crops Research Institute for the Semi-Arid Tropics (ICRISAT) in Kenya. She is working to integrate gender into a project called Tropical Legumes III (TL III).

A cooperative effort by the International Center for Tropical Agriculture, International Institute of Tropical Agriculture, and National Agricultural Research Systems partners from Sub-Saharan Africa and India, TL III is an international initiative funded by the Bill & Melinda Gates Foundation. According to the project's description, "TL III aims to develop improved cultivars of common bean, cowpea, chickpea and groundnut and deliver their seed at scale to small-holders in Gates Foundation focus geographies."

As a gender consultant on the project, Miller's work is related to integrating and mainstreaming gender into the project. She is tasked with providing four deliverables related to gender yield gaps in agricultural productivity.

"Women tend to produce less than men largely because of the quantity and quality of agricultural inputs used by female farmers," explained Miller. "Two of the deliverables are reports assessing the empirical evidence about the extent and causes of the gender yield gap and the second report is a review of policies designed to address the yield gap in agricultural production."

"The Gates Foundation is funding the TL III project and also my position as a gender consultant. The Gates Foundation is very interested in funding these kinds of projects. Development aid is a big part of what the Foundation supports and incorporating a focus on alleviating global gender inequalities, particularly as it relates to social and economic development, is a big part of the kinds of work they are interested in funding," Miller explained.

The aim of much of the foundation's work, and specifically TL III, parallels much of Miller's focus on the UW-River Falls campus. At UW-River Falls, Miller has been involved with both the Women and Gender Studies Committee and the Association for International Development.

"Since I joined UW-River Falls in 2009, my research has focused on female scientists in Ghana, Kenya, and Kerala, India, so I've been working in the area of development and gender for some time," she said.

Miller, former winner of UWRF's Excellence in Advising Award and Excellence in Research, Scholarly and Creative Activities Award, anticipates the positive affect her international work will have on her teaching and research at UW-River Falls.

"I think the project and living in Kenya for six months will impact my teaching in both unexpected and expected ways," she said. "Experiences like this make us better teachers. Just like our engagement in research and conference activity keep us abreast of developments in the field, which we use to enhance our lectures and class activities, outside partnerships – particularly those that take us abroad – enhance our understanding of our own subject matter."

This enhancement, explained Miller, is a crucial aspect of teaching and will directly impact the education she brings to students at UW-River Falls.

"The experiences I am having as a gender consultant are varied, challenging, and easily applicable to almost every course I teach," she said. "I will leave this position with a much more nuanced understanding of the complexities behind that awareness and international development more broadly."

"I've been nothing but impressed with the work our university does with global engagement, particularly in Western Europe," she explained. "For a number of very understandable reasons, there have been fewer opportunities for global engagement in places like Africa and India. While we have programs in Africa and India on our campus, this position offers an unprecedented chance for me to make new connections that might lead to any number of places, but also potential new programs and opportunities for students and faculty."

The effects of Miller's position with TL III is two-sided. Not only is she contributing to the strengthening of a needy population, but she is also representing UW-River Falls – and it's mission – on a global level.

"In the current political climate of the state and nation, we frequently hear about the lack of need for majors like sociology. Acting as a consultant for ICRISAT demonstrates – in a very real way – sociology's potential to cultivate job skills and applicability of a degree in sociology to a broad range of careers," said Miller. "In this way, this position demonstrates, not only to our students but also to others on and off campus, the relevance and importance of a liberal arts education."

Overall, Miller knows her work with TL III is just one instance of UWRF's commitment to being global, innovative, and excellent.

"These kinds of outside partnerships, of which there are many on the UW-River Falls campus, are reflective of a university with faculty who are truly multidisciplinary and engaged," she said.

For more information on the TL III project and Miller's work, visit http://tropicallegumes.icrisat.org/.