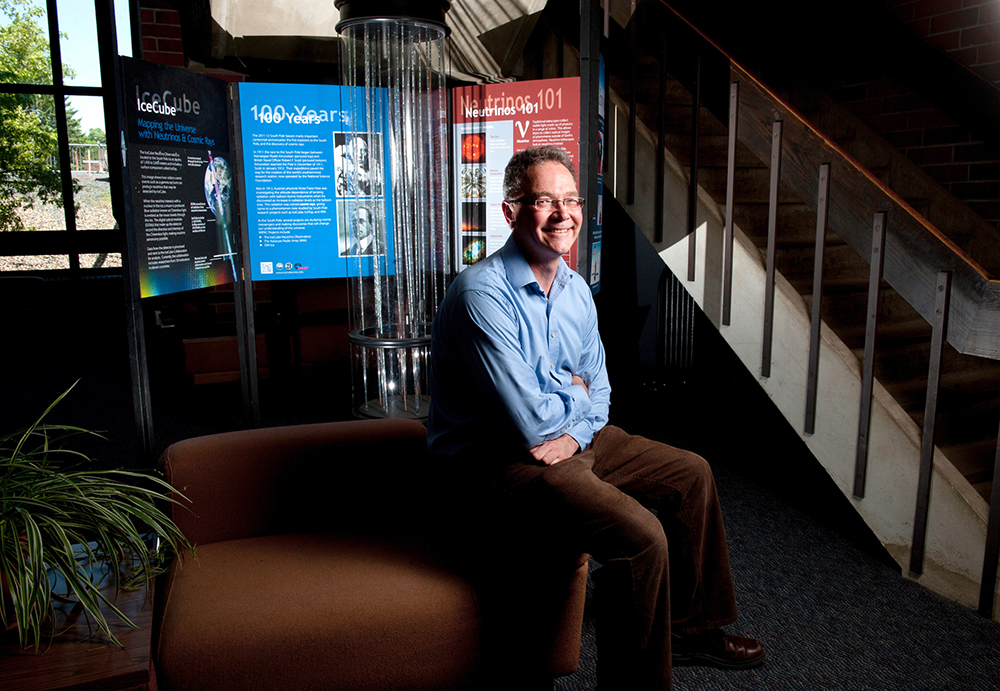 4 billion light years in the making: one UW-River Falls professor’s journey to a scientific breakthrough

Jim Madsen has spent the better part of two decades working with a team of scientists on a quest to find answers to some of the universe’s greatest mysteries.

“In order to see new things, you have to look in different ways. All science is this continual quest to look in new ways,” he explains.

In Madsen’s case, his scientific quest has taken him to the bottom of the earth - a journey that has now paid off with a once-in-a-lifetime scientific breakthrough. Madsen, a physics professor at the University of Wisconsin-River Falls, has been part of the IceCube South Pole Neutrino Observatory collaboration and its predecessor since 1998. IceCube, as it’s commonly known, is located near the Amundsen-Scott South Pole Station and consists of a cubic-kilometer particle detector made of Antarctic ice. The detector is buried under the ice, extending nearly 2,500 meters deep.

“It’s more than a 100-year story, but there was this particle that was first suggested to exist in 1930. It’s called a neutrino,” explained Madsen. “Then it took 25 years after it was suggested before somebody could figure out a way to prove that it [a neutrino] really existed. There was indirect evidence and then in 1955, they figured out a way to show these particles.”

“People then said, ‘hey, those neutrinos should come from outer space.’ Just like we see light from outer space, we should be able to see neutrinos,” he continued. “The problem is that they almost never interact. So, in order to see enough of them to do astronomy, they said you would have to build the biggest instrument ever conceived.”

The “biggest instrument ever conceived” eventually came to fruition as IceCube. The world’s first gigaton neutrino detector, IceCube was designed to primarily observe “neutrinos from the most violent astrophysical sources in our universe,” according to the project’s website.

“I got involved in 1998. We were able to build this giant detector and then see these particles from outer space and eventually see a very special one in September,” said Madsen. “We were able to alert other telescopes that swung around and looked in that direction and determined where it came from.”

The special object Madsen is referring to is a blazar and the observation is a dramatic scientific breakthrough that may very well affect how future research is performed. In findings announced earlier this month, IceCube’s international team of scientists identified a blazar – which is a technical term for a giant elliptical galaxy with a massive spinning black hole in its center – as the first known cosmic source for a neutrino. The blazar, which is about four billion light years from Earth, emitted the neutrino that was detected Sept. 22, 2017.

This observation helps answer the more than century-old question about what sends subatomic particles such as neutrinos and cosmic rays speeding through the universe. In laymen’s terms, neutrinos have no charge, which means they are completely unaffected by even the most powerful magnetic field. This means they can travel nearly undisturbed from their sources. This unhindered path gives scientists an almost direct pointer to their source. Thanks to IceCube’s observations, this source was identified as a blazar situated in the night sky just off the left shoulder of the constellation Orion.

“This took more than 100 years. People have known that there were very high energy particles coming from space but couldn’t figure out where they were originating. It’s difficult to describe how exciting this is,” said Madsen. “Even though we had this idea and it was based on other people’s suggestions, nobody had ever built an instrument like this. We weren’t sure, even if it worked, that there were really particles like this.”

“It’s like really truly being the first to discover something and it’s very satisfying because I’ve been working on this project for 20 years,” Madsen said. “So finally getting to see what we had envisioned when the idea was first conceived is incredible.”

Although one source has now been detected, the mystery-solving has just begun said Madsen.

“The big question was where are they coming from and then how do they get to such high energies? And so now that we know at least one spot where they come from, the game is to try to figure out, given that we know where they come from, how do they get to such high energies?” he explains. “But now at least we know what type of objects we need to think about. We also think that there are other places where these high energy particles will come from. We found one and what that is is a proof that this is a way to do it.”

“For us it’s great news. It’s not the end of the story, it’s the beginning of the story. It’s such an amazing mystery that people are still interested in. It’s not like they go, ‘we solved half of it, good enough,’” he continues. “They go, ‘wow, now there’s some hope that we could solve the whole mystery.’ This is a way we could finally do it.”

As Madsen points out, this discovery is a major revelation in the field, and it’s one he never dreamed could have been possible.

“Certainly in terms of the science stuff that’s going on now, even I, as an undergraduate, I would never have had any idea that we’d be able to do the things that we’re doing,” he said.
“It’s hard to describe it without sounding like you’re bragging or overstating it, but this is really an incredible accomplishment that potentially opens up a whole different way to understand the universe.”

Madsen’s enthusiasm about the project is palpable and although he humbly heaps credit on the many colleagues and researchers working on IceCube, he doesn’t hold back his excitement when talking about the value students are gaining from the collaboration.

“The neat thing – and this is unique – there is only one other undergraduate institution involved formally with the IceCube project. We have undergraduate students here [at UW-River Falls] who are making real contributions to it. The idea that you could work on a project of this magnitude as an undergraduate is really amazing,” he said.

When discussing the IceCube collaboration, Madsen repeatedly marvels at the breadth of the project. He is quick to point out that the idea of building a neutrino observatory amongst the glaciers of Antarctica seemed like the stuff of dreams 20 years ago. But he’s incredibly grateful that he stuck with the project, and the ideas of perseverance and innovation he’s learned from IceCube are ones he’s applied to his role in the Physics Department at UWRF.

“When I first came here, the way we thought in the Physics Department was that you had to do three years of classes, so you could learn enough stuff to do research and things. Between your junior and senior year maybe you could get involved with some research. There were not very many opportunities here on campus,” he recalls.

Roughly 150 UW-River Falls students have worked on the IceCube project in some way, most on campus, but a handful have made the trek to Antarctica. The benefits of the IceCube collaboration for UWRF students, according to Madsen, stretch far beyond the upper Midwest campus of UW-River Falls and the frozen swath of ice at the South Pole.

“This summer we have 10 or 11 students that are all supported, that are getting paid to do research. We just finished a grant that sent students to Europe. Over four summers we sent 19 students to Europe to work with institutions that were part of the IceCube collaboration,” he shares. “It is incredible the opportunities. It’s almost the only place where you could go that you’d have the chance to do those things.”

“I think when you look at what this particular project [IceCube] offers, but even overall what the Physics Department has to offer, UW-River Falls really is an amazing place with so much going on. The faculty are so committed and again, this is the payoff that came from many years of work that enabled us to be successful with getting more resources that allow us to support these students in being a bigger part of this research,” Madsen said.

As for why it’s so important for UW-River Falls’ students to play such an active role in research like what’s being done with IceCube? Madsen knows the answer lies beyond the basic understanding of neutrinos and blazars.

“This type of work, people often ask ‘what do you think it would be good for? What might the value be?’ The reality is we don’t know,” he said. “There are lots of skills, though, that are developed that can be utilized in many different areas.”

“We’ve had roughly 150 students at River Falls work on this project and almost all of them have gone on to do something else. A handful of them have gone on to get Ph.Ds in physics. Most are engineers or technicians or are working in industry analyzing data. The skills that they developed by working on problems like this turn out to be transferable though.”

As for now, the research, the collaboration and the journey to find more answers will continue for Madsen and his students. The IceCube project has funding secured for almost 15 more years and Madsen is hopeful that this recent finding, along with bigger plans for the future, will help ensure the continuation of the IceCube collaboration for years to come.

“The neat thing is we have an opportunity to do something where we just say, I want to try to understand this. In some simple sense, it’s no different than saying I want to climb the highest mountain. We’re motivated by trying to conquer something,” Madsen said.

“It’s hard to explain in easily understood terms why it’s a great thing. It’s like any human accomplishment, whether it’s running or making a great movie or a sculpture, it’s kind of what we create as humans,” he reflects. “We created this incredible instrument that allows us to see things that before were thought to be almost impossible to capture.”

“I think, in the end, it’s a neat story of this international group of people that united to accomplish this great thing,” he concluded.

* The project's success at UW-River Falls is a team effort. Physics faculty Rellen Hardtke did her Ph.D. research on the predecessor to the IceCube project, AMANADA, and Glenn Spiczak and Surujhdeo Seunarine have spent the majority of their careers working on the IceCube project. In the last half decade, Professor Lowell McCann has contributed his optics expertise supervising summer research projects for undergraduates during astrophysics research at UWRF.