Think “it girls” are a new phenomenon? Well think again! While sisters Blanch and Nellyebelle Reardon weren’t gracing the covers of tabloids or Instagram, these sisters made names for themselves regionally in the 20s and 30s for their “costume programs”, which could be described as a tamer form of vaudeville or "polite vaudeville" as it is sometimes known. The sisters gained notoriety for their performances that purported to portray a variety of characters or cultures. The Reardon Sisters, as they would eventually become professionally known, made their own costumes and staged photographs and performed skits where they would dress as different characters created by the sisters; these included a honeymoon couple, maid and mistress, colonial girl and flapper, and what was just described as “Irish”.

A program in the collection defines their public recitals thus:

"Our Programs are designed for clubs, camps, schools, benefit-recitals and luncheons. A full afternoon or evening program usually consists of three or more sketches…The sketches in themselves are varied in that some emphasize dialogue and pantomime, while others stress the musical numbers.”

Not all of the characters portrayed by the Reardon Sisters would play well with today’s audiences, but their manuscripts collection includes a variety of photographs, programs, clippings, and advertisements for the sisters “songs and sketches in costume” covering venues in Wisconsin, Illinois, Iowa, Indiana, and Michigan.

Blanche Alice (1901-1957) and Nellyebelle (1908-1989) Reardon were born on a 20-acre family farm in Kinnickinnic Township in St. Croix County Wisconsin. The youngest of eight children, the sisters moved with two siblings and their mother into the Town of River Falls by 1920, where Blanche completed teacher training at the State Normal School at River Falls (now University of Wisconsin- River Falls). The sisters followed a brother to Chicago and utilized their musical and performance training to start the Reardon Sisters act. They performed through the late 1920's-early 1930s. Blanche Reardon married Charles Cannon, an intellectual property lawyer from Superior, Wisconsin in 1935 and the Reardon Sisters discontinued performances shortly thereafter. Nellyebelle married George D. Tolpo in 1942.

The Reardon Sisters collection is available for use in the Area Research Center and University Archives located in the Chalmer Davee Library at the University of Wisconsin-River Falls campus. Please see our About Us page for information about planning your visit and updated hours.

All biographical information and images taken from the collection. 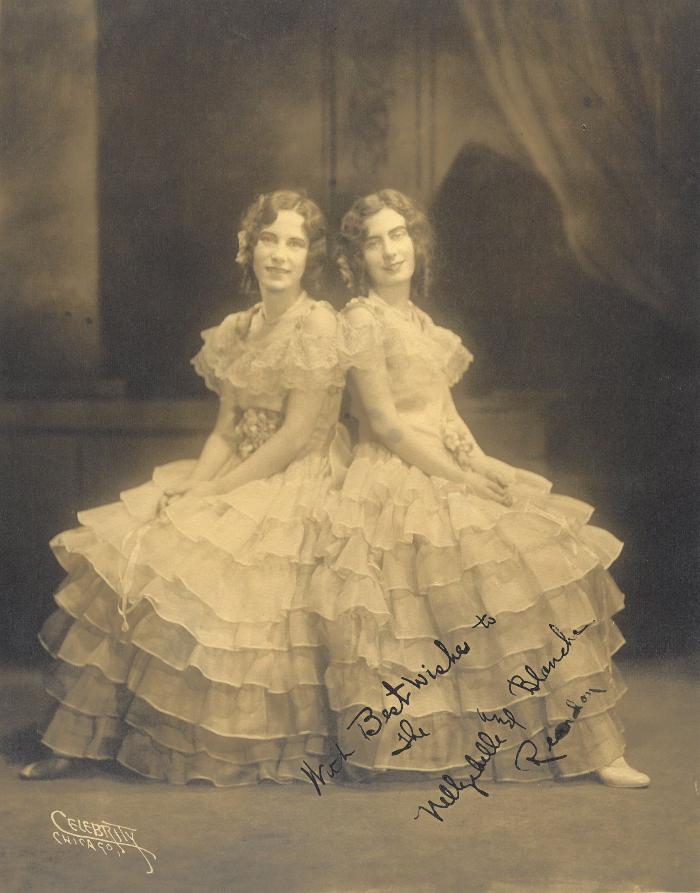