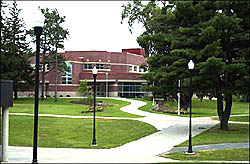 It would be accurate to say of this campus that "a river runs through it." Situated on 226 acres of rolling land, the main campus of the University of Wisconsin-River Falls features 26 major buildings and a spacious interior campus mall. The South Fork of the Kinnickinnic River (a class 1 trout stream) provides a pleasant natural area linking the main campus with the Ramer Athletic Complex.

The campus has some unique features, such as the largest vertical sundial in North America and a new meditation garden donated by an alumnus.

The campus has been described as the most architecturally consistent campus in the UW System.

A new Child Care Center opened in July, 2004. Suite style residence halls opened in Fall 2005 and 2012, bringing the number of residence halls to eleven. A new University Center was completed in January, 2007, and is a model of sustainability. 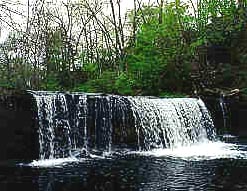 River Falls is located along the beautiful Kinnickinnic River and is named for a cascading falls at the junction of the South Fork and the Kinnickinnic.

The university is the western-most institution of the 26-campus University of Wisconsin System. Increasingly, it is being called upon to meet the educational needs of the expanding Twin Cities Metropolitan area that includes River Falls.

The University of Wisconsin-River Falls is the only public university located in the St. Croix River watershed of 7,650 square miles in western Wisconsin and eastern Minnesota.

The city of River Falls is home to thirteen parks, is twelve miles from the confluence of the Mississippi and St. Croix Rivers, and is ten miles from a ski area. 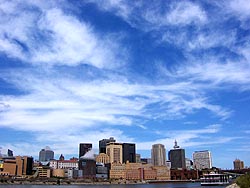 Between Minnesota and Wisconsin in a picturesque valley is the Lower St. Croix National Scenic River Way, which flows between bluffs of limestone and sandstone. Historic river towns, including Hudson (home of UWRF's first satellite campus), dot its banks, and fishing, swimming, canoeing, sailing, and boating are common.