Welcome to our very first Virtual Spring Gala! We want to thank all our students and mentors who have spent the past year working on their undergraduate research projects. This gala showcases their hard work and dedication to their projects and putting it all together into a presentation.

Unfortunately, not everyone was able to present their projects, but we still wanted to create a space for students who could. Below are Vimeo links to each undergraduate’s project where they share and explain their research.

Survey of Vitamin and Mineral Levels in Pre-Weaned Dairy Calves

For this project, we were looking to observe the levels of several vitamins and minerals in pre-weaned dairy calves. These calves were being fed pasteurized milk from cows on the farm and one objective of the study was to determine if the cow's milk was providing the calves with sufficient vitamins and minerals.  We began by taking blood samples from approximately 25 heifer calves between three and four weeks old and an additional 25 calves between five and six weeks old. These samples were then sent out for analysis and the results were compared to known values for the vitamins and minerals and were analyzed between the two different age groups. 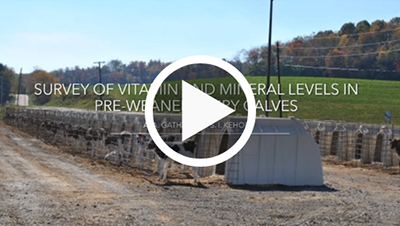 Across the road from the Mann Valley Lab Farm in River Falls Wisconsin, a 2 year study was conducted on a 9 acre alfalfa-orchardgrass mixed plot to test the effectiveness of newer baleage inoculants. Because of the advances made in microbiology, companies have been able to come up with new inoculants which are designed to be more efficient in preserving the quality of the bales and mitigate nutrient loss that would normally be seen in other hay making processes. The goal of our study was to analyze the effects of these microbial inoculants on fermentation of alfalfa-orchardgrass baleage in Wisconsin. 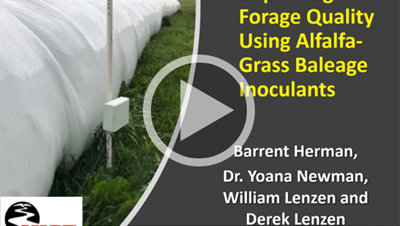 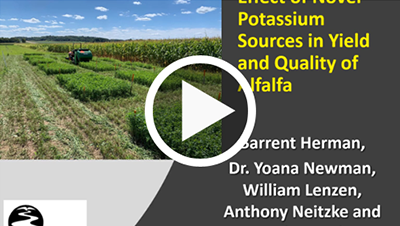 Do Commodity Prices Affect Agricultural Land Values? If So, How Much?

A study of agricultural land value in Wisconsin and how commodity prices among other factors affect these values. 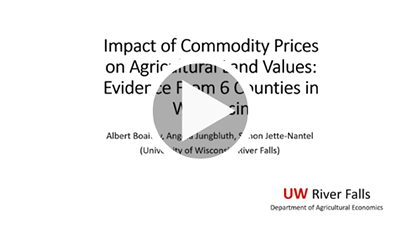 To evaluate seasonal change in nutritive value of cool-season forage species used in dairy heifer rotation. Determine the botanical composition of grass and legumes, and establish a baseline for improved management decisions and increase the utilization of old stands. 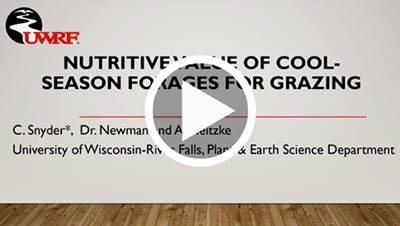 The study was designed to understand how community members engage in community development and planning activities. We utilized a combination of an on-line survey and in person interviews to conduct this research. A survey of US residents was developed and a first round of responses captured in Spring, 2019. We then sent out the survey to respondents in the Netherlands. We wanted to compare the results between the two countries to see if there was a difference in community engagement. 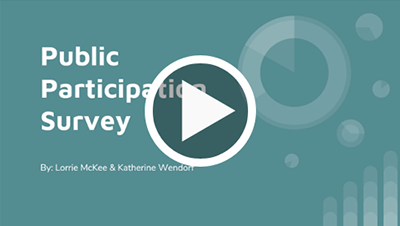 Candytufut, (Iberis sempervirens) is an ornamental perennial plant which requires a vernalization period during production to induce flowering. In this study, the effect of gibberellin treatments prior to 2, 4, and 6 weeks of vernalization was investigated on the cultivar ‘Whiteout.’  Seed was sown in 288 plug trays in mid-December of 2019 and grown to the 7-9 leaf stage. GA4 or exo-Dihydro-GA5 (25 ug) was applied n a 5uL drop of 50% ethanol to seedling plugs prior to placing them in a cooler for the vernalization treatment.  Plants were removed from the cooler at 2, 4, or 6 weeks, transplanted to 1204 packs, and grown in a greenhouse supplemented with LED lighting. Flowering and height was assessed mid-May. Flowering was not observed in the control or gibberellin treated candytuft seedlings, however, GA4 treatments promoted an increase in plant height. 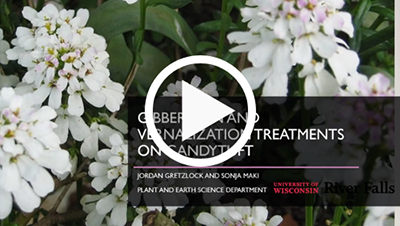 College of Arts and Sciences

Predictions of the Longevity of Small Fishing Companies of Scotland 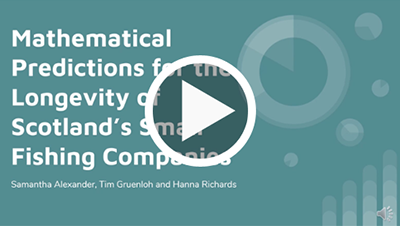 We did a video presentation due to the COVID-19 outbreak. My partner and I filmed from two different locations but put them together in the video. We discuss five different versions of Santa Claus from different countries and how these different figures impact society. 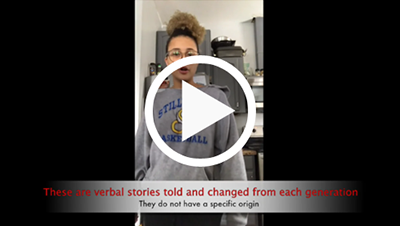 A photography project designed to increase awareness of the Autism Spectrum Disorder. 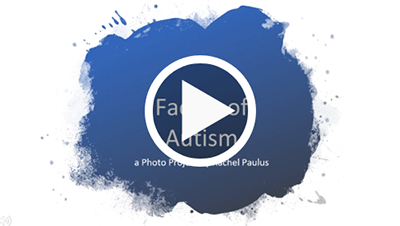 Bacteriophages are viruses that attack specific bacteria. Research conducted at the University of Wisconsin- River Falls had lead to the discovery of a unique and diverse group of Phages through isolation from soil samples. An example of the unique Phages that were discovered is the following: Odyssey395 and Paella. Both of these Phages have led to interesting findings about their gene functions and how the genome was oriented. 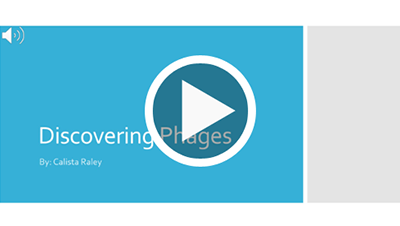 Prevalence of false memories in a negative mood induction

This study investigated the role of emotion in false memory. Mood (neutral, sad, fear) was induced using movie clips validated to elicit the desired emotion (Gross & Levenson, 1995; Hewig et al., 2005). As a mood manipulation check, participants provided a mood rating using a subset of the Positive and Negative Affective Schedule. Susceptibility to false memory was measured using the DRM false memory induction paradigm: Participants viewed lists of words during a study phase on which their memory was subsequently tested. Words on each list were semantically related to a critical, nonpresented lure. A false memory occurs if the participant incorrectly judges a critical lure as presented during the study (Roediger & McDermott, 1995). We analyzed the mean number of critical lures falsely recognized across the three different mood conditions (neutral, sad, fear) using an ANOVA. We found that fear, like sadness, encouraged item-level detail processing and that the number of critical lures falsely recognized by participants was significantly lower for fear than neutral and sadness conditions. People who experience upsetting events while in negative moods tend to report vivid details. Our findings indicate that people who are scared may actually be less susceptible to false memory formation. This study could add to our understanding of detail and gist processing and which might occur in traumatic situations. 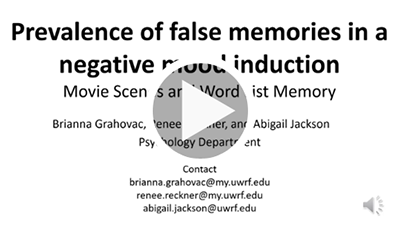 This project studied the effect of caffeine on the muscle development and integrity as well as on the nervous system using zebrafish embryos as a host. Caffeine was introduced to the hosts at different times post fertilization and it’s effects were studied using UV microscopy after immunostaining. 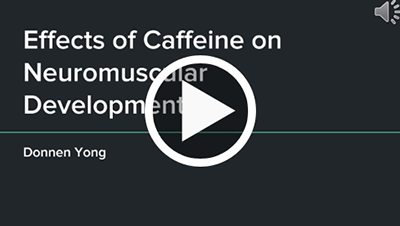 The need for the creation of new antibiotics has never been more urgent with the growing trend of antibiotic resistance in the bacterial world. The Center for Disease Control (CDC) has even gone as far to say that it is the biggest challenge for public health officials. It is difficult to fathom that antibiotics have only been around since 1945 and resistance was first observed within a few years after the discovery. Bacteria can become resistant because of random mutations that can give rise to degradation enzymes that will interfere with the transport mechanisms (porin and protein pumps). To make the issues even worse, bacteria confer resistance. Currently, the CDC has placed 18 bacteria on the watch list that are a threat. Infections and contamination due to the 18 bacteria are estimated to have cost the economy $168 million in 2018 and caused more than 2 million infections. The antibiotic discovery programs in the pharmaceutical companies have been decreased as they need to invest a lot of money and time, while the results are not promising. The USFDA approval of new drugs decreased by 56% between 1998-2002. This research focuses on the production of new antibiotics and exploring the metabolic profiles of the antibiotic producers with a long-term goal to share the pilot scale information with industries. Currently, 3 Bacillus sp. isolated from the soil have shown to inhibit the growth of Acinetobacter baylyi and Enterococcus raffinosus. These are two emerging pathogens in healthcare with the ability for antibiotic resistance. To accomplish the discovery of new antibiotic compounds, co-culturing will be utilized with the hopes of revealing cryptic genes that would otherwise be silenced in a pure culture. Preliminary results from co-culturing revealed that the isolates have the ability to completely eliminate the pathogens from a mixed culture. Additionally, it was discovered that our Bacillus isolates  utilize broad spectrum of carbon sources. During the metabolic profiling it was discovered that 2-hydroxybenzoic acid was not utilized efficiently as compared to other benzoic acids. This result is significant as 2-hydroxybenzoic acid is an important precursor compound to many other compounds in nature and it may also help in promoting antibiotic production from the Bacillus sp. Future research will be focused on genomic analysis to examine the antibiotic biosynthetic islands within the genome. The genes will be tested for expression using qRT-PCR when co-cultured with the pathogen. Various biochemical tests will also be performed with the hopes of obtaining a concrete metabolic profile. 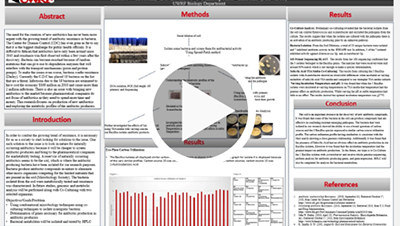 Coming of Phage: Isolating and Analyzing Actinobacteriophages Atuin and Pumpernickel

This presentation will be about Atuin and Pumpernickel, two of the phages sequenced in BIOL  195 this Spring semester. These phages are viruses that infect the bacteria Arthrobacter globiformis and Microbacterium paraoxydans, respectively. The presentation will cover how the phages were isolated, analyzed, and sequenced, as well as interesting features of the two phages and the goal of the SEAPHAGES project. Some of the interesting features that will be discussed are the large genomes and long genes found in both Atuin and Pumpernickel, including the longest phage gene found to date. 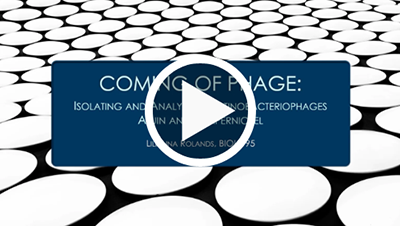 This ArcGIS Online Story Map Series was a partnership effort between the Kinnickinnic Corridor Collaborative and the KRLT. Through an interactive approach, this map was designed to help facilitate conversation around river use, recreation, and maintenance in the Kinnickinnic Watershed.  It also provides a great resource for residents and visitors alike to search and discover new places to explore the beauty of the region.  I am proud of the result and feel more confident with my skills in ArcGIS Software and online mapping capabilities as well as how to negotiate the varying desires of multiple stakeholder groups. To view the Story Map, Kinni River Recreation – Water Access, please follow this link. 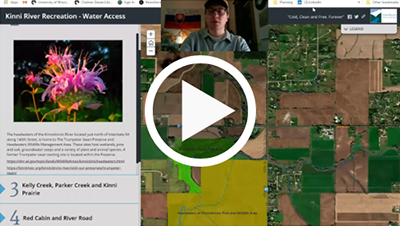 College of Education and Professional Studies

A 4 Legged Approach to Speech Therapy

Animal-assisted therapy (AAT) is a term used to describe the utilization of animals in diverse manners beneficial to humans. The psychological and physiological benefits of human-animal interactions have been heavily documented, however, there is a lack of published research on the impacts of utilizing AAT within the scope of practice for treating children with speech and language impairments. The purpose of this study is to examine the impact on motivation, participation, and attention/on-task behavior when canines are used to supplement reinforcement schedules within direct child speech-language intervention. The certified therapy dogs were used as positive reinforcement and reward for completing speech goals/activities along with goal-directed activities during the therapy session.  These factors were documented through multiple-viewpoint surveys (graduate clinician, client, and undergraduate observer) using a Likert scale. The baseline data of this study has shown that the Therapy Dogs do create a positive impact on the client’s participation and motivation during their therapy sessions. 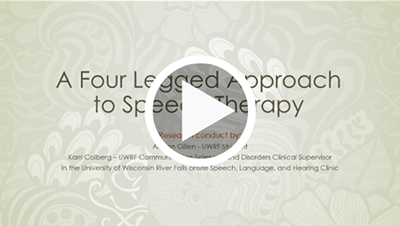 Quantitative study on how students perceive themselves on having disabilities and if this affects their access to services. 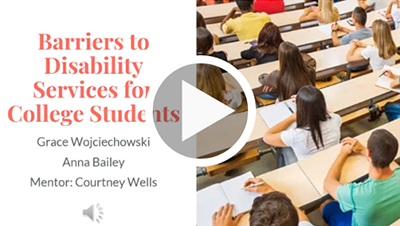 If questions/comments, please email us at
URSCA@uwrf.edu