Membership in a registered student organization at the University of Wisconsin-River Falls is intended to be a valuable and beneficial experience to each student who takes part in this opportunity. Each organization is encouraged to provide new members with an orientation that is positive, informative and in alignment with federal, state and local laws, as well as UWRF policies. Any form of hazing is prohibited by University policy and Wisconsin State Law, in accordance with Wisconsin statute 948.51 which can be further understood at http://docs.legis.wisconsin.gov/statutes/statutes/948/51

As defined by the Fraternity Executives Association, hazing is any action taken or situation that is created, intentionally, whether on or off premises, to produce mental or physical discomfort, embarrassment, harassment or ridicule. Hazing is a complex social problem that is shaped by power dynamics operating in a group and/or organization and within a particular context.

Hazing activities are generally considered to be physically abusive, hazardous, and/or sexually violating. The specific behaviors or activities vary widely among participants, groups, and settings. While alcohol use is common in many types of hazing, other examples of typical hazing practices include personal servitude, sleep deprivation and restrictions on personal hygiene; yelling, swearing, and insulting new members/rookies; being forced to wear embarrassing or humiliating attire in public, consumption of vile substances or smearing of such on one’s skin; brandings; physical beatings; binge drinking and drinking games; sexual simulation and sexual assault.

The following are some examples of hazing divided into three categories: subtle, harassment, and violent. It is impossible to list all possible hazing behaviors because many are context-specific. While this is not an all-inclusive list, it provides some common examples of hazing activities.

Harassment Hazing involves behaviors that cause emotional anguish or physical discomfort in order to feel like part of the group. Harassment hazing confuses, frustrates, and causes undue stress for new members. Examples include:

Violent hazing includes behaviors that have the potential to cause physical, emotional, and/or psychological harm.
Examples include, but are not limited to:

State Statute 948.51, Sections 1-3
948.51(1)(1) In this section “forced activity" means any activity which is a condition of initiation or admission into or affiliation with an organization, regardless of a student's willingness to participate in the activity.
948.51(2) (2) No person may intentionally or recklessly engage in acts which endanger the physical health or safety of a student for the purpose of initiation or admission into or affiliation with any organization operating in connection with a school, college or university. Under those circumstances, prohibited acts may include any brutality of a physical nature, such as whipping, beating, branding, forced consumption of any food, liquor, drug or other substance, forced confinement, or any other forced activity which endangers the physical health or safety of the student.
948.51(3) (3) Whoever violates sub. (2) is guilty of:
(a) A Class A misdemeanor if the act results in or is likely to result in bodily harm to another.
948.51(3)(b) (b) A Class H felony if the act results in great bodily harm to another.
(c) A Class G felony if the act results in the death of another.
948.51 History History: 1983 a. 356; 1987 a. 332 s. 32; Stats. 1987 s. 948.51; 2001 a. 109.

If you feel that an activity or event should be reported, please visit our “Report it!” Resource page for more information.

Hazing can be reported in various ways to university or local authorities. If bodily harm takes place, UWRF strongly encourages you to follow up with the River Falls Police Department and the Office of Student Conduct and Community Standards. However, given the nature that hazing can occur and emotions that can follow an incident, it is essential that the student inform any professional staff at the university so that we can identify the necessary resources and steps needed to best serve the student involved. UWRF aims to create a safe learning environment that does not encompass any act of hazing. 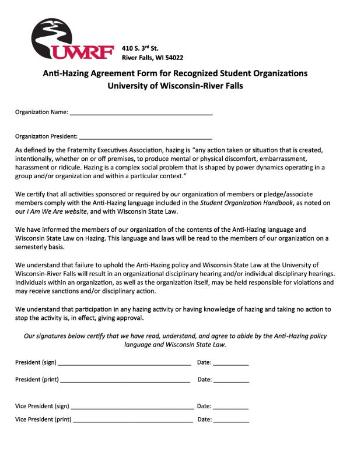