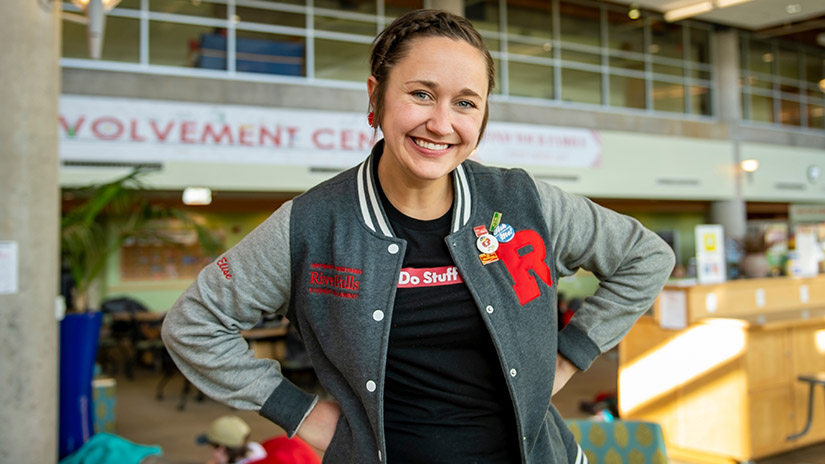 To say that Elise Peters is enthusiastic about her job is an understatement. As Events and Activities Coordinator for Student Involvement, she is passionate about her career on campus. Elise loves her job because she helps foster a culture of student engagement and service.

“My job doesn’t feel like work,” she said. “My students are full of ideas. Needless to say, my days are always interesting.”

Elise graduated from UW-River Falls in 2014 with an elementary education degree. She didn’t expect to attend UWRF initially because it was so close to her hometown of Hastings, Minn., but after touring the campus, she knew UWRF was home. And now, she is right at home in the Student Involvement Center having worked there during grad school.

Elise is well-known on campus, as well as in the River Falls community, for her positivity and kindness. A few years ago, she befriended fellow University Center colleague named Francis. Elise always welcomed Francis with a warm hello followed by conversation when she saw him. After inviting Francis to lunch one day and telling her about his love for bikes, Elise notices his bike was worse for wear. She had an idea and reached out to the Random Acts of Kindness organization to request a donation.

The story attracted the attention of UWRF alumnus and KARE 11 reporter Boyd Huppert.

Elise helped raise $6,000 from Huppert’s coverage of the story. One might ask where the money went and it’s a simple answer. She decided to find more people in need like Francis. When a call came in from the City of River Falls Police Department about a community member in need, Elise was quick to help. She coordinated the donation of another bike to a man named Ty who is autistic and doesn’t drive.

Outside of UWRF, Elise enjoys being an active participant in a yoga community, but not just any yoga community. It’s called laughter yoga and the goal is to laugh as hard as you can with strangers. She is deeply rooted in this niche community in Minneapolis.

Elise enjoys finding the newest, latest and greatest concerts, restaurants, activities, food, drinks and anything that sparks her interest. She only likes to do things once, unless she can build on something great for the future.

Her most recent project was starting “Mental Health Mondays” on campus to remind people that mental health is a part of everyday life.

Elise strives to bring positive energy, kindness and acceptance to everything she does at UW-River Falls.