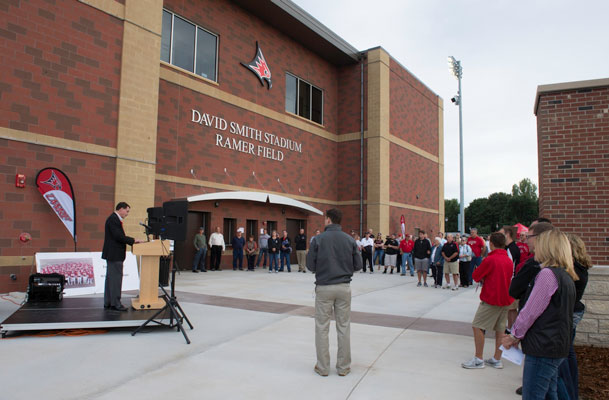 David Smith Stadium was renovated in 2015 through student fees and private support, including . The previous press box was deconstructed in December of 2014 with new construction of the press box and adjacent plaza area in the Spring and Summer of 2015. While home to both UWRF Falcon and River Falls Wildcat Football, the Stadium also hosted UWRF Women's Soccer during the 2015 season as well as countless other Campus Recreation, Campus, and Community Events.

David Smith Stadium
David Smith Stadium recognizes the lead gift from the Smith Family and First National Bank of River Falls in memory of David M. Smith, who was a passionate football fan of both the Falcons and Wildcats. He spent his lifetime in River Falls and advocated change to improve life in the community that he loved. He felt compelled to give back through service and contributions. David was the third generation of the Smith family who own and operate the First National Bank of River Falls, where he served as Board Chair, President and CEO until his death in 1994.

Ramer Field
Ramer Field, which is a part of the overall David Smith Stadium, had its natural grass turf replaced with Astro Turf 3D Series synthetic turf product in the Fall of 2014.  The field was available in early October 2014 in time for the River Falls Wildcat Homecoming game as well as UWRF's which was played the next day.

The new synthetic turf at Ramer field is not only used for UWRF Football, but also hosts a variety of campus and community events.  Since installing the new turf the field has hosted everything from Intramural championships under the lights to community youth athletic events to regional Marching Band contests; Ramer Field's versatility has grown immensely.

Zimmerman Gateway
The entrance gateway is named by Shannon & Angel Zimmerman who grew up in Augusta, Wisc. and moved to River Falls in 1996. They are founders of Sajan, Inc., a global leader in language translation solutions and would later unite in business with their sons Josh and Nick and their families to establish the first River Falls winery. They have been active in the community and proudly support both River Falls High School and UW-River Falls athletics.

Mike Farley Home Coaches' Box
The home coaches box is named for Coach Mike Farley who served as head football coach from 1970-1988. With a career record of 117-71-3, Coach Farley set a standard of excellence that places his teams as some of the very best in Falcon athletic history.

Fran Polsfoot Gate
The south entrance gate is named the Francis Charles "Fran" Polsfoot Gate through gifts from former players in honor of the former UW River Falls head football coach and head track coach, who coached the Falcons from 1957 to 1961.