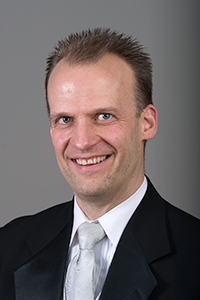 Peter Benson is in his fourth year at UW-River Falls where he serves as Director of Men's Chorus, Instructor of Applied Voice, and Lecturer of Music Appreciation. Mr. Benson earned both his Masters of Music in Choral Conducting and a Bachelor of Science in Music Education from Mankato State University. Prior to UW-River Falls, he served as Director of Choral Activities at North Dakota State College of Science in Wahpeton, N.D, Choir Director at Lakeville South High School, and an adjunct professor in Vocal Jazz at Mankato State University. Peter is also currently the Artistic Director of the Great Northern Union (GNU) Men's Chorus in Minneapolis, MN. Under Peter's Direction, GNU has participated in four International Contests, placing as high as 2nd and have been crowned Land O'Lakes District Champions numerous times. He also directed the GNU for their performances at the 2008 and 2012 North Central ACDA conventions.

Peter is also an active clinician and coach for choruses and quartets around the country. He has been a clinician for several festivals and workshops throughout the Barbershop Harmony Society, as well as, within the educational system in the Midwest.