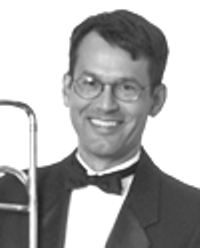 Rick Gaynor, instructor of Trombone and Euphonium, also directs the Brass Ensemble, Trombone Choir and teaches Music Appreciation. He received his B.S. in Music from UW-River Falls where he studied with James Gauthier and David Herring. He received his M.M.in Trombone Performance from the Cleveland Institute of Music, where his teachers included Cleveland Orchestra trombonists Ed Anderson and Tom Klaber. He also spent a summer participating in the Aspen Music Festival in Aspen, Colorado, where he studied with Per Brevig of the Metropolitan Opera.

Mr. Gaynor is an active performer in the Twin Cities area. He has performed hundreds of concerts with the Minnesota Orchestra, the Saint Paul Chamber Orchestra, and has performed in top Broadway musicals, including nearly 150 performances of "Phantom of the Opera."

He has performed with many of the world's leading conductors, musicians and entertainers. Performances have taken him to the world's leading venues, including: London's Queen Elizabeth Hall, as part of the London Jazz Festival; and New York's Carnegie Hall, with the Minnesota Orchestra. He has been a featured soloist with the UW-River Falls Wind Ensemble, UW-River Falls Symphony Orchestra, the Phipps Center Orchestra, the International Trombone Association Conference, and a clinician with the International Tuba/Euphonium Conference.

Mr. Gaynor can be heard on numerous recordings including the Intergalactic Contemporary Ensemble's (I.C.E.) "I Dig," Innova 548 and the "Nike Jordan XX2" commercial.

Rick Gaynor lives in Cottage Grove, Minnesota, with his wife, Patti, son, Mike, and daughter Ali. (Daughters Megan and Erica are in college.)