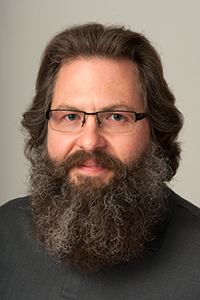 “M” has specialized in Oracle technologies for a couple decades. As a Database Administrator (DBA) and a Middleware Administrator, he has been employed by Andersen Corporation, Oracle, EDS, and General Dynamics. While at the latter three, he was fully allocated for significant periods at companies such as Sun Microsystems, St. Jude Medical, and Turner Construction, and for government operations such as Scott County (Minnesota) and the United States Postal Service. Additionally he created and was employed by TAU Services, where he allocated himself to Carlson Companies.

M both grew up and raised his family near Hudson. After a 22 year absence, he was excited to return to his alma mater, where he graduated with a Mathematics degree and strong minors in Physics and Music. At UWRF, his primary responsibility is supporting eSIS, our Student Information System, which runs on Oracle’s PeopleSoft.

M has a passion for learning. He is currently pursuing a Master of Ministry—at his local church but through an accredited, competency-based school in Ames, Iowa. He enjoys spending time with family (including his grandchildren), helping at his church, playing drums, traveling, participating in risky behaviors, and managing his micro-ranchery (a mixture of enology and equines).