The Daegu Gyeongbuk English Village (DGEV) is maintained through a partnership between the University of Wisconsin-River Falls (Wisconsin, USA) and Yeungjin University (Daegu, South Korea).  The purpose of DGEV is to train students of all ages in the usage of the English language and to cultivate a global learning environment for the 21st Century.  Additionally we wish to establish an environment which provides English education to South Korean citizens in an experiential learning environment of western cultures.

The Daegu Gyeongbuk English Village is a full-immersion, full-services program that offers rich English instruction for all ages.

A kindergarten exists for the youngest students that offers specialized programs to introduce English, while the focus for school-aged children and teenagers is a full-immersion environment. The campus offers 22 different "situation-locations" that are intended to act together as a "mini-city" where students can use English in real-life situations ranging from boarding a plane at an airport to depositing money at a bank to mailing a letter at a post office. 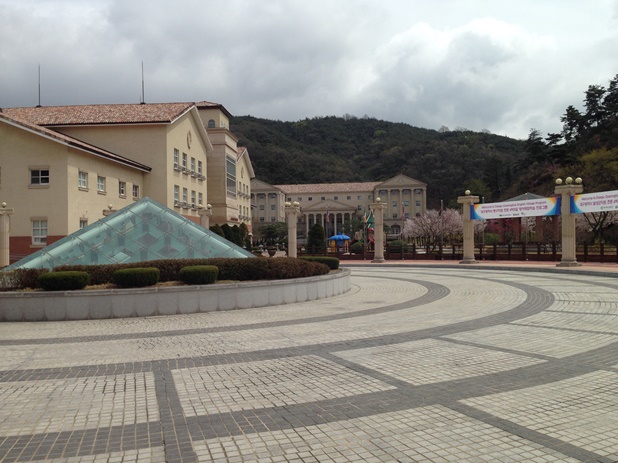 There are 101 classrooms in total, distributed across the three main academic buildings--the Main Building, the Situational Building, and the Creativity Building--plus the dormitory building for students and teachers.

In addition to the full-immersion experience there are intensive-instruction facilities geared for adolescents and adults that allow for English to be taught by subject, such as music, cooking, and art.

For more photos or information about the programs visit

Daegu, South Korean, (literally 'large hill'), officially known as the Daegu Metropolitan City, the fourth largest city after Seoul, Busan, and Incheon, and the third largest metropolitan area in the nation with over 2.5 million residents. The city is the capital and principal city of the surrounding Gyeongsangbuk-do province, although it is not legally part of the province. The two areas combined are often referred to as Daegu-Gyeongbuk, with a total population of over 5 million. Daegu is located in south-eastern Korea about 80 kilometres (50 miles) from the seacoast, near the Geumho River and its mainstream, Nakdong River in Gyeongsang-do. The Daegu basin, where the city lies, is the central plain of the Yeongnam region.