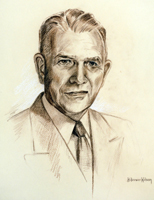 When Ben Zaffke of Greenwood graduated from the two-year course in agriculture in 1917, he took with him memories of singing with the Glee Club and of the fraternal life. Below his picture in the oldMeletean are the words: "Never mind the expenses, we have lots of them." But graduation time was a time of war, and his first assignment was the U.S. Navy. Back at Camp Logan in January 1919, he was anxious to shed his uniform and get back to agriculture studies. President Ames had written all service men, offering to help them get early release, and so Zaffke wrote to Ames:

I received your letter stating, if I needed help to write you. I sure need it now and, if granted, it will mean much to me.

All men that can get letters showing they are of value in civilian life are given their discharges . . . I’ve spoken to the commanding officer and he said I needed a letter. I told him I’d like to get out to finish my work at school. Could you write him showing these things: that I’m a graduate of your Agricultural course; that I’d get full credit for my work at the ‘U’ as I intend to sometime if I could get out. Lay special stress on the fact that men are really needed in this line of work . . . I (am) losing lots by staying here besides losing valuable time . . ."

When Zaffke was discharged, he studied at the University of Wisconsin-Madison, and from 1922 to 1958 he was associated with the James Manufacturing Company in Ft. Atkinson, serving as vice president and manager of the Poultry and Incubator Division. His other business activities over the years included chairman of the Board of the National Agricultural Supply Company, president of the Knob-Hill Builders, partner in the El Rancho Motel of Barstow, Calif., and director of Loganway of Ft. Atkinson. He was also a member of the World Poultry Association, State Director of 4-H Club work, and the author of Artificial Incubation by Single-Stage Method. His civic contributions included a membership and offices in the Wisconsin State Historical Society, Rotary, American Legion, and Shriners. Zaffke was long interested in alumni affairs, especially in the agriculture program. He returned to address the alumni banquet in 1957 and was a charter member of the Foundation Board of Directors when it was established in 1948.