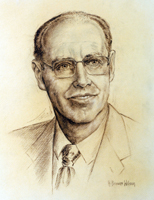 When Keith Wurtz was a student at River Falls, he found campus life just the stimulation he needed. Though he had a major in agricultural education and science, he became involved in a wide variety of student interests. He was a college debater, wrote for the Student Voice, was a member of the Agrifallians, the Science Club, intramural teams, and was also an officer of his class and a member of the Honor Society.

After receiving his M.D. degree from Northwestern University, he began a career in Arlington Heights, Ill. He was chief of surgery at Northwest Community Hospital, consulting surgeon at the Veterans Administration Hospital at Hines, Ill., and clinical surgical professor at Stritch School of Medicine, Chicago.

Though deeply involved in his profession, he has found time to serve as a member of the Arlington Heights School Board, the Board of Directors of the Arlington Heights Bank and Trust, and as executive director of the Northwest Suburban Chapter of the American Cancer Society. He gives credit to his college days at River Falls for opening the doors to the world of medicine, surgery, and community service.