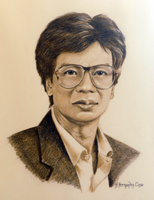 Wong began his career in 1975 after graduating from UW-River Falls with a double-major in journalism and art. He worked as a free-lance journalist for Asian magazines and Architectural Digest. In 1979 he began exploring the remote areas of China and its minority peoples.

Then in 1982 he led the first of six major exploration and photojournalism expeditions for the National Geographic Society. In 1985 he led an expedition for several months across thousands of miles that culminated in him being credited with finding the true source for the Yangtze River in the rugged plateau regions of Tibet.

In 1986 Wong founded CERS while living in Los Angeles and relocated to Hong Kong in 1994. Its mission is to explore the remote regions of China, while conducting multi-disciplinary research, implementing nature and culture conservation projects, and sharing that information through education and the media.

Since then he has led numerous expeditions and has initiated a dozen CERS conservation projects. Among them are preservation of the "hanging coffins" of the extinct Bo people of Yunnan province; locating, in concert with imaging from NASA, cities buried in the sands of the Silk Road caravan routes; documenting poaching of the world-protected Tibetan Antelope; initiating Tibetan mural conservation projects; protecting the endangered Black-necked crane, and preventing a natural destruction of a remote Tumu Monastery. Media world-wide have reported on Wong's work, including CNN, NBC, ABC, the BBC, the Discovery Channel and the National Geographic Channel.

Wong lectures widely throughout the Pacific Rim and is an adviser to higher education institutions and government agencies in the People's Republic of China. He also has found the time to publish a quarterly magazine, "China Explorers," as well as the bi-lingual books, "Closer to Heaven" and "Closer to Earth." In 1999 his book, "From Manchuria to Tibet," won the prestigious Lowell Thomas Travel Journalism Gold Award.