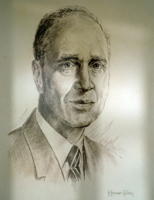 When the class of 1930 graduated from the institution, the faculty advisor predicted that "this class will go down in history  .. ." Indeed, it has–Wroe Wolfe was a member of that class. He served as editor of the Student Voice, sang in the operetta and other musical groups, and then went on to a distinguished career in geology. In his senior year he wrote editorials on "Who is a Gentleman?,"  "Boost, Don’t Knock," and others critical of the "long-drawn-out ‘moos’ . . ." used in the "Ag Yell" at games.

Wolfe grew up on a farm near Roberts, majored in agriculture at River Falls and after graduation went forth with a box full of sandwiches and $23 in his pocket to study theology at Boston University. Soon he shifted his interest to geology and earned a Ph.D. in that field from Harvard. He joined Boston University’s staff in 1941 and five years later founded the department of geology in which he served until his retirement in 1974. Having a long, productive career, he authored or co-authored nearly 100 articles and these books: "This Earth of Ours-Past and Present" (1950), "Manual for Geometrical Crystallography" (1953), "Earth Science" (1953), and "Earth and Space Science" (1966). He was a fellow of the Geological Society of America and of the American Mineralogical Society. Two minerals have been named for him-Wolfeite and Wroewolfeite.

After his retirement, Wolfe taught at Salem State College in Massachusetts, served as consultant to the Nigerian government, conducted field trips and continued to publish his geological research. One of his faculty colleagues wrote about his "enormous creative intelligence (that) bubbles just below his craggy surface." In the "Wolfe Volume" written by his graduate students, it is said that he was many things-"farmer, crystallographer, family man, gemologist, preacher, world traveler, storyteller, clandestine poet, inventor, educator, and geologist." Though his greatest contribution may have been made as a teacher, his profession has also been influenced by his "blister hypothesis" in which he claimed that radioactivity was the source of the internal heat of the earth. He died July 17, 1980.