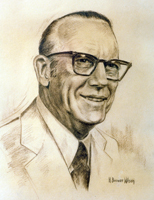 Agricultural education was a proper major for a Grantsburg farm boy to pursue when he entered the UW-River Falls in 1932. In the following four years he joined the Agrifallian Society, played intramural basketball and volleyball, served on such campus committees as Homecoming, Special, and Prom, and upon graduation became vocational agriculture instructor in the Milltown-Osceola high school system. Four years later he became agriculture extension agent for northern Wisconsin, a position he held for six years.

Wallin spent most of his distinguished career as the manager of the Midwest Breeders Cooperative, a position he held from 1945 to 1976. In that time this cooperative became one of the largest and best-known artificial breeding agencies in the Midwest. His leadership in agricultural circles was recognized by other agencies. He was director and chairperson of the Farm Credit Board of St. Paul, 1959-1970, director of the Wisconsin Federation of Cooperatives, director and president of the National Association of Animal Breeders, and chairperson of the State Board of Agriculture.

Wallin has been honored by many agricultural groups. His alma mater’s College of Agriculture named him "Wisconsin Agriculturist" in 1971. Honors and awards have also come from the Agricultural Records Cooperative, the future Farmers of America, the UW-Extension System, the National Association of Animal Breeders, the Federal Land Bank of St. Paul, and others. Wallin’s contributions to agriculture enhance the role played by UW-River Falls in opening the doors for farm youth and for building a strong farm economy in Wisconsin.