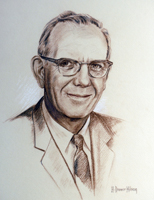 The Distinguished Alumnus Award was made to Melvin L. Wall posthumously following his accidental death March 25, 1967, while serving on a team of educators surveying universities in Vietnam. All eight members of the team were killed in a plane crash after having completed the first phase of their study arranged by the U.S. Agency for International Development.

Born in Holton, Kan. in 1912, Wall and his family moved to a farm near Hawkins where he attended the public schools. He graduated in 1936 from the University of Wisconsin-River Falls with a degree in agricultural education and taught agriculture at the Roberts High School for the next two years. The University of Wisconsin-Madison granted him the master’s degree in 1939 and a doctorate in 1957. From 1940 to 1945 he served on the Soil Conservation Service research project at Richland Center. Wall joined the staff of his alma mater in 1940, served as chair of the Plant and Earth Science Department, and on the Campus Planning Committee. He was the originator of the campus beautification plan that included the Amphitheatre construction and the tree planting project along the South Fork of the Kinnickinnic. Most of this had been completed by the time of his death. The Wall Outdoor Amphitheatre and the fountain near Hagestad Hall are named in his honor.

In paying tribute to Wall, President E. H. Kleinpell said: "In addition to the sense of personal loss that his colleagues at the university feel in the death of Melvin Wall, there is also a great loss to the institution. Wall devoted 27 years of his life to the university from which he was graduated and had great influence on its students and alumni. His interest in the university went beyond the classroom and included all aspects of its welfare. As chairman of the campus planning committee, he did much to preserve and enhance the natural beauty of the River Falls Campus . . . Wall was unstinting in giving of himself and our only solace is that his death resulted from an important task in which he believed."