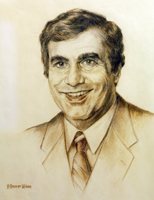 Called "St. Paul’s Voice in Washington," Bruce Vento has represented Minnesota’s 4th District in the U.S. House of Representatives since 1976.  As a student at River Falls, he majored in biology and was active in various student organizations.  He began his career as a teacher of physical and social  sciences in Twin Cities public schools, and also was elected to the Minnesota House where he served as assistant DFL majority leader.  He has always been interested in legislation to help those in greatest need.

As a legislator, Vento has served on the Banking, Finance, and Urban Affairs Committee; Select Committee on Aging; Interior and Insular Affairs Committee; as well as others.  His committee work and speeches in Congress and elsewhere indicates that his greatest concerns have centered on the aged, environmental problems, education, and the handicapped.

He has been honored by the National Council of Senior Citizens, Isaac Walton League, Federation of the Blind, and others for his work. Having majored in political science and taught public school for 11 years, he continues to use this experience to educate voters on protecting the environment, and helping the elderly and others extending beyond the 5th district of Minnesota.