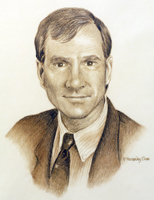 A successful financial adviser who has held careers with two nationally known investment firms and is currently responsible for Yale University's $3 billion endowment fund, David F. Swensen has been named the 1996 Distinguished Alumnus for the University of Wisconsin-River Falls.

A native of River Falls, Swensen graduated from UW-River Falls in 1975 with bachelor of arts and bachelor of science degrees. He earned master of arts and master of philosophy degrees and a doctorate from Yale University, where he studied with James Tobin, a recipient of a Nobel prize in economics.

Swensen has successfully directed Yale University's endowment since 1985. He also oversees the various money managers who invest Yale's portfolio. His success has been measured by the fact that Yale's investment portfolio has outperformed many of the nation's institutional investors as well as the rest of the Ivy League's higher education institutions.

One reviewer of the Yale Endowment Brochure, Jack R. Meyer, president and chief executive officer of Harvard Management Company, Inc., commented: "This may be the best investment piece I have ever read."

Swensen also teaches a basic finance class that is one of the most popular in Yale's economics department, in addition to courses on finance and portfolio theory.

In 1977 Swensen began his career as an economist at the International Monetary Fund. There he assisted with the preparation of a new publication, "Government Finance Statistics Yearbook." In 1979 Swensen entered the private sector as an associate in corporate finance for Salomon Brothers, a nationally recognized investment firm, where he provided financial advice and services to corporate and public clients. He specialized in the development and analysis of new financial techniques, general capital markets analysis and government advisory work.

In 1981 Swensen initiated the concept of the swap market, the exchange of obligations denominated in different currencies. The following year he joined the investment firm of Lehman Brothers as senior vice president of corporate finance and directed its swap market subsidiary. By 1985 the operation exceeded $50 billion.

In 1992 Swensen was appointed as a member of the Pension Managers Advisory Committee to the Board of Directors of the New York Stock Exchange. He also was recently selected to be a member of the Howard Hughes Medical Institute Advisory Committee, which counsels the Institute on the management of its $6.9 billion investment portfolio. The Institute is a scientific and philanthropic organization that conducts biomedical research. Through its grants program, it supports education and research.

In announcing Swensen's recognition as Distinguished Alumnus, Chancellor Gary A. Thibodeau said he is "an example of a River Falls graduate who has gone into an extremely competitive career area in finance, with a rise in managing huge portfolios that is amazing for a person his age."

"He looks back to his training at River Falls as the foundation upon which he built his successful career. Bringing him back to the campus to honor him is great not only for Dr. Swensen, but for the university."

Swensen is the son of Dr. Richard Swensen, dean emeritus of the UW-River Falls College of Arts and Sciences, and Grace Swensen.