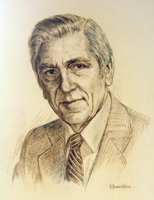 The name of Stratton has been well known on the River Falls campus for many years. Stratton’s father, C.G. Stratton, joined the staff in 1914 and served as professor of geography and dean of men until his retirement in 1950. A residence hall is named in his honor.

Stratton joined the Los Alamos National Laboratory upon completing his Ph.D. degree in physics at the University of Minnesota, and has been involved in a wide range of nuclear physics and reactor safety issues.  He was a member of an ad hoc advisory group to the President’s Science Advisory Committee, and is a member of the Planning Committee of the American Nuclear Society, which gave him the society’s special award in 1981. He is currently chairperson of the Argonne Universities Association Review committee for the Experimental Breeder Reactor II. After the nuclear plant accident at Three Mile Island in 1979, Stratton served as the physicist on the investigating team and was the principal author of the staff report "Alternative Event Sequences." He also contributed to other documents of the Technical Assessment Task Force. Stratton was also a member of the special Nuclear Emergency Search Team that was sent to Northern Canada to assist in the search for, and recovery of, fragments of the Soviet satellite Cosmos 594.

Stratton’s work has international recognition. He was a delegate to the Second International Conference on the Peaceful Uses of Atomic Energy at Geneva, Switzerland, in 1958, was the U.S. representative to the Cedarache Laboratory in France in 1965-1966, and has also been a consultant to the Swedish government.

His contribution to the nuclear age has made him a distinguished alumnus not only of UW-River Falls, but also the River Falls community in which he grew up.