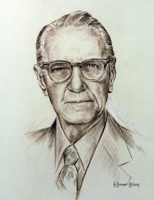 Neal H. Stoddard, a Madison contractor and real estate man, once said that he was "the one and only janitor" at the Downing High School from which he graduated. He "swept the floors, cleaned blackboards, cared for the playground, walks, and carried in the wood for each of the large wood burning stoves which were the entire heating system." When his ambition took him to River Falls to study agriculture, he boarded at a cooperative rooming house where the meals cost 18 cents. When he left the institution at the end of the two-year course, the yearbook quoted him as saying: "Oh, this learning, what a thing it is." As a first general farm boy to go beyond high school, he had "made it" the hard way.

After teaching agriculture at Sun Prairie, he became a contractor and, in the years between 1935 and 1970, he built more than 500 houses in the Shorewood addition of Madison. But Stoddard never forgot his old high school and River Falls, and his thoughts often turned to them. To quote The Frosting on the Cake: History of the University of Wisconsin-River Falls Foundation, 1948-1976:

But now on the 50th anniversary of his graduation, his thoughts turned to his old home town of Downing, his old college at River Falls, and the need to lend a hand to those who had come after him. Beginning in 1972-73, he first established a River Falls scholarship of $500 a year for a high school graduate from Downing (or Glenwood City if none qualified from his old high school). . . . In March, 1972, he also established a scholarship for a high school graduate from the Badger Conference which included Star Prairie where Stoddard had started his teaching career. Stoddard then turned to other ways to enrich campus life at his alma mater . . . (First) he gave a residence (in Madison) to the Foundation. This house, when sold for $23,000, was to provide an investment to sustain a ‘perpetual scholarship’ for some boy from the Badger Conference.

When Stoddard died, he left an apartment house in Madison and a piece of commercial property, appraised at $54,000. This graduate of 1918 had indeed contributed to that "margin of excellence" which the foundation had long sought.