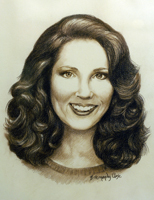 Patricia Kay Steiner, a Withee, Wis., native who has built a prestigious career as a classical singer with the Metropolitan Opera Company in New York has been named the 2000 Distinguished Alumnus of the University of Wisconsin-River Falls.

She joins the ranks of such other UWRF alumni luminaries selected for this honor as former NASA Chief Astronaut Daniel Brandenstein and Dr. Michael Ebersold, a neurological surgeon at the Mayo Clinic who has included among his patients President Ronald Reagan, the late King Hussein of Jordan, and President Zayed of the United Arab Emirates.

Since her graduation in 1979 with a degree in music education, Steiner's talent has garnered her the opportunity to perform with the Met and many other opera companies around the nation and the world. She has shared such stages as Carnegie Hall with opera and classical music icons Luciano Pavarotti, Placido Domingo, Jose Carreras, Marilyn Horne, Zubin Mehta and Mirella Freni.

Her talent as a singer was immediately recognized after her graduation from UW-River Falls. In 1980 she entered the Metropolitan Opera Auditions in Minneapolis, which seek to identify promising performers, and became the youngest person to ever win the competition. As a result she was invited to perform as guest soloist with the Apollo Men's Chorus at Orchestra Hall in Minneapolis and with the Des Moines Metro Opera Company in Iowa.

Steiner next moved to Chicago to pursue a master's degree in the nationally acclaimed music program at Northwestern University, and continued her professional performances by appearing with the Chicago Lyric Opera Company and Chicago Opera Theatre. In 1985, she entered another Met regional competition and again took first place.

Moving to New York, she performed with regional opera companies and in 1991 successfully competed for an opening as an alto singer with the Met.

Her mentor, emeriti music Professor Elliot Wold, noted the significance of that achievement:

"To become a member of the Met is considered the ultimate goal for a classical singer. The company is one of, if not the best, opera companies in the world. There were more than 400 excellent singers auditioning for the coveted position and Patricia was hired."

At the Met, Steiner has performed solo and with the chorus on Met tours of Europe, Japan and the United States. She has been heard on the Metropolitan Opera Radio and Television broadcasts and has performed for President Bill Clinton.

Her Met roles have included the Page in "Rigoletto," the Hand Maiden in "Turnadot," the Beggar in "Death in Venice," and Lehrbub in "Die Meistersinger."

She also performs with many other operas and solo performances, including the New Amsterdam Vocal Arts Quartet, the Windham Chamber Music Festival, the Inwood Opera, and the New York Philharmonic.

Steiner also has performed in many charity concerts and has returned to Wisconsin for performances, including at UW-River Falls. This year she will perform in Withee to help in its celebration of its 150th anniversary.

Wold concluded, "Patricia's accomplishments are exceptional and outstanding. She is truly a special graduate!"