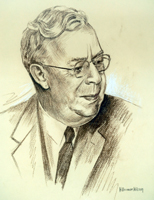 The first Distinguished Alumnus Award was made to Dean Smith, an otolaryngologist of La Crosse. He not only had made his mark in medicine but had also kept in contact with his alma mater over the years. He was a graduate of the Normal School in the days when only two-year courses for high school graduates were offered, when South Hall was the only building on campus, and when all 318 students were preparing for teaching careers.

As a student, Smith was active in campus affairs, serving as treasurer of the Inter-Normal Oratorical League, playing the part of "Flunk" in the senior class play, and showing his enjoyment of post-high school studies by placing below his picture in the yearbook these words: "A little folly, with my wisdom; a little nonsense now and then is pleasant." Following his graduation Smith taught at Burlington, Iowa, and then began his medical studies at the University of Illinois in 1911. This break with his teaching career may have been influenced by his professors in the sciences, or by some of the 6,500 books in the Normal School library, or possibly by the requirement that students take hearing tests.

When Smith returned to the campus he was asked to reminisce about the "old days" and he recalled the time when a supervising teacher set up the first hearing test in the nation.  He did not indicate that this influenced his decision later to specialize in this field of medicine. But he did remember that his grandfather, Osborn Strahl, a farmer in the Kinnickinnic Valley, helped locate the fourth Normal School at River Falls in 1874, and he was proud of that fact. When he received the first Distinguished Alumnus Award, he gave this advice to students: "Love your school and someone connected with it so you will talk about it, revisit it frequently, and promote its growth." And this he did.