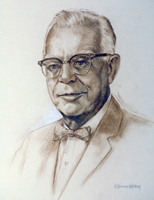 Roy H. Sakrison, a freshman from Deer Park who entered the Normal School in 1910, helped increase the school’s enrollment to 301 and soon became a member of the football team and other campus groups. In later years he said that he still remembered how hard it was to make ends meet in his student days and, consequently, he has made gifts to the Foundation to help many deserving students through college.

Following graduation, Sakrison taught school before serving in World War I as a lieutenant. He was awarded the Distinguished Service Cross after being wounded on the Meuse-Argonne front. After the war he worked in the Deer Park bank, and then became the managing officer of the Bayport State Bank in Minnesota. Three years later he joined the Andersen Corporation’s Accounting Department and later became vice president for finance.

When Sakrison retired in 1962, his thoughts went back to the days when he struggled through the Normal School, prompting him and Mrs. Sakrison to establish an annual scholarship for a graduate of his high school who attended River Falls. Later, he gave the Foundation sufficient Andersen stock to grant a number of scholarships to students from the St. Croix Valley. He also served on the Foundation Board and assisted it in various ways to enrich campus life. Though his achievements in business and finance are many, his membership in the 1911 football team and his alma mater was one of his fondest memories.