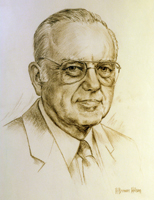 As a student of agriculture and the sciences at River Falls, Thomas Ronningen participated in many campus activities, including FFA, YMCA, the Science Club, reporter for the Student Voice, and as a member of the debating squad. He served on the first Student Senate and earned membership in the Honor Society. After graduation he taught vocational agriculture, served as a chemist with DuPont, and then pursued graduate work at the University of Wisconsin-Madison where he was granted a Ph.D. degree in 1949.

In his career, Ronningen served as an officer in the U.S. Navy, was a professor of agronomy at the University of Maryland, and was principal agronomist with the Cooperative State Research Service of the U.S. Department of Agriculture. For many years he was director-at-large at the Northeast Regional Association of State Agricultural Experiment Stations.

Ronningen had many honors bestowed upon him for his leadership in agricultural experiment stations’ research programs. In 1968, he received the Honor Award of the Organization of Professional Employees of the Department of Agriculture and 11 years later received a Certificate of Appreciation from the Federal Executive Institute. He is a Fellow of the American Association for the Advancement of Science, and has been a delegate to the International Grassland Congress in Reading, England. During this University’s centennial year in 1974, Ronningen was invited to be a Centennial Visiting Professor and returned to the campus for a series of lectures.

Agriculture is indebted to Ronningen for having chosen a career in agronomy and research.