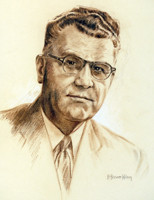 The fourth distinguished alumnus, Edwin P. Rock, spent his entire career as a teacher and administrator in public schools. Born in Ellsworth, he moved to River Falls in 1900 and, 18 years later, graduated from the science and mathematics course. He was a good student and his special extra-curricular activity was athletics. His first position was teaching mathematics and coaching in the Hudson schools, and five years later he became superintendent of the system, a position he held for the remainder of his long career in education. Always known as an administrator who ran a "tight ship," he well earned the accolade given him by a former student, Attorney General George Thompson, who said at the time of Rock’s retirement, "He is an example of stability which speaks more eloquently than words."

Indeed, Rock could claim to be "the richest man in this community," as he said figuratively when he left the public schools. In his 46 years in the teaching profession, he had also been president of numerous community organizations and professional groups, and from 1948 to 1957 served as the first president of the UW-River Falls Foundation Board of Directors.

After retirement he continued to serve on the St. Croix County Board of Supervisors and on the Foundation Board. Holding degrees from both the University of Minnesota and the University of Wisconsin-Madison, Rock‘s contributions to the public schools and to the organizations and associations of northwestern Wisconsin will long remain a monument to his work.