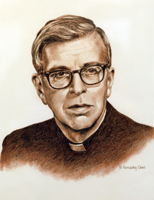 When Father Paul Prucha returned to his alma mater 50 years after having graduated to receive the Distinguished Alumnus Award, it was also a homecoming filled with memories of his student days when he built the background for a distinguished career in teaching and scholarship. His father had served as registrar and biology professor and his brother and sister had also graduated from the Teachers College. After teaching in Amery High School and receiving a master’s degree from the University of Minnesota and a Ph.D. from Harvard, he joined the Jesuit order and became a history professor at Marquette University.

In making the presentation of the Distinguished Alumnus Award, Chancellor Gary Thibodeau spoke of Prucha’s "absolutely incredible" listing of honors, academic achievements, and prestigious national awards. As the author or editor of more than 30 books and numerous scholarly papers, he is known as one of the premier authorities in the field of American Indian/Euro-American and policy on the western frontier in the early 1900s.  For his books, this distinguished alumnus has received numerous honors and awards such as the Alpha Sigma Nu book prize, the Billington Prize from the Organization of American Historians, Outstanding Non-Fiction Book of the Year by the American Heritage Center, and nomination for the Pulitzer Prize. He has held fellowships awarded by the Guggenheim Foundation, the Social Science Research Council, the Huntington Library, the Charles Warren Center of Harvard University, and others.

In his acceptance speech, Prucha spoke nostalgically of his campus days, remembering his teachers, including the late Professor Orville Hanna who required students to resubmit papers even if a comma was upside-down. Prucha said at the award ceremony that River Falls gave him "a good basis for the rest of my life," enabling him to make a difference as he taught history and authored books.