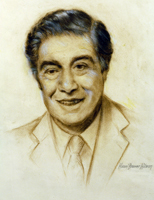 Stanley Peloquin, upon returning to the campus for the 1988 Commencement, said that UW-River Falls "had much to do with my interest, enjoyment, and success in teaching."  After a career that had brought him membership in the National Academy of the Sciences and many other honors, he recalled his appreciation of his undergraduate professors in chemistry and biology for their unusual abilities to teach difficult subject matter.

Peloquin grew up in Barron where he attended local schools. Graduating from UW-River Falls in 1942, he went on to obtain a master’s degree from Marquette in biology, a master’s from the UW-Madison in genetics, and a Ph.D. from UW-Madison in 1952.

He has been a member of both the Genetics and Horticulture departments and involved both in teaching and research in crops, primarily potatoes. His major responsibilities were in developing new potato varieties for the world.  He holds the Cambell-Bascon Professorship and the Genetics and Plant Breeding Award of the National Council of Commercial Plant Breeders. His career has contributed to solving food problems of the Third World.