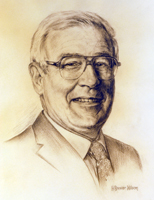 When LaVerne Palmberg began his collegiate career in 1948, the college had its largest enrollment–831 students–which included many World War II veterans.  When he graduated, his alma mater had expanded its mission and changed its name to State College.  His studies centered on agriculture, but his campus interests were varied.  He formed an intramural basketball team, known as the "Polkers," named after his home county, Polk County.

Upon graduation Palmberg served as vocational agriculture instructor at Osceola High School for two years and then spent two years in the U.S. Army Signal Corps in the Panama Canal Zone.  His agricultural interests led him into various agricultural marketing organizations and to a career in 1960 with Northrup King Company.  He has been vice president, division manager, and held other positions in this national seed company.  Over the years he has written many articles and appeared on numerous scholarly programs.  In addition to these endeavors, Palmberg has found time and interest to serve as president of the Alumni Association and on the investment committee of the UW-RF Foundation.

In the letter of selection, Chancellor George Field said that Palmberg’s "University and Foundation work and the state and national recognition of marketing leadership with Northrup King were evidence of a career worthy of the honor bestowed by this University."