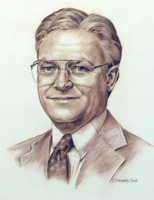 After Robert D. Nelson graduated from Amery High School, his first award was the River Falls Freshman Chemistry Award.  This might have provided some insight into a career that led to his selection as a distinguished alumnus in 1987.

Though he lists himself as a "scientist," Nelson earned a Ph.D. in pathology at the University of Minnesota.  He was a post-doctoral fellow in medical genetics, a post-doctoral fellow in pathology, and a special fellow at the National Institutes of Health.  Currently, he is associate professor in the departments of Surgery and Microbiology at the University of Minnesota, and directs the Department of Dermatology’s graduate studies.

This winner of the Freshman Chemistry Award developed a method of measuring human white blood cell responses that is now used in research studies worldwide.  As an author of 90 published research papers and a member of several professional organizations he gives UWRF the credit for having pointed him into the world of research.  Chancellor Gary Thibodeau, when presenting Nelson the award, said he "may be known around the world in medical research circles but from our perspective he is one of our own."