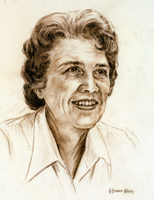 Long before the ERA and the Women’s Rights Movement caught the attention of universities and political institutions, Emogene Nelson was recognized as a strong voice in physical education and competitive sports for Wisconsin women. When the first Wisconsin Intercollegiate Athletic Conference was created in 1978, she became its executive secretary and led the colleges and universities into the stream in women’s athletics.

Nelson grew up on a Pierce County farm and became an elementary teacher, teaching in Durand, Cornell, and Spooner before receiving her Ph.D. degree at the University of Minnesota in 1970. She joined the physical education staff at UW-River Falls in 1970 where she served as department chair from 1970-73, and as assistant to the vice chancellor after 1973. By a vote of students and alumni, she was presented with the Outstanding Teacher Award in 1978. She also served on the Board of Education of the River Falls Public Schools from 1975 to 1978.

There is hardly a state-wide committee on physical education in the UW System or the public schools on which Nelson did not serve. She was president of the Wisconsin Association for Health, Physical Education, and Recreation, on the search committee for the president of the University of Wisconsin System, and dozens of others. In addition, she was elected to the Faculty Senate for a five-year term.

Nelson clearly met all the requirements for the Distinguished Alumna Award because of her accomplishments in her field, her contributions to Wisconsin, and her continuing interest in the institution where she launched her college career. She died Aug. 15, 1984.